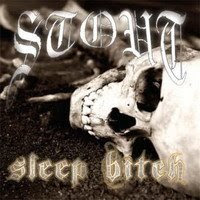 If Satan really exists I’ve just found him doing vocal work for Baltimore based hardcore commando called Stout. Tad not only looks like a one big mother fucker not to be fucked with, by his voice and the way he uses it makes you feel like being sodomized by a devil himself. If you wanna go back to times when hatred and revenge was the value of highest order in the hardcore scene, Sleep Bitch is a record for you!

Stout represents Baltimore hardcore scene and I guess they are kinda well known over there. Band was formed about 10 years ago and this is their second full length. Judging from their myspace profile, they are heavily influenced by bands like Neglect, Bulldoze and Sheer Terror. Although these influences are easy to hear, you can’t say they got no sound of their own. I really like the heavy production of this CD. It’s clear, but it doesn’t make it sound less violent and raw. The most unique component of Sleep Bitch lies within the vocals work done by Tad. He pours strength and hatred into every note he hits. I like the fact that the band just do what they wanna do and don’t care about trends or fashion. Their just doing their thing and they do it like they should. Highly recommended stuff!