Everybody Gets Hurt - It Is What It Is 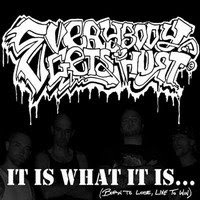 Dark Seeds Of Man is a truly classic and a masterpiece of NYHC genre and it is still one of my personal favorites. When I heard they are about to release the new full length, I was really hyped. It took them few years to put this shit together but it finally hit the streets. So what can we expect form It Is What It Is?

Basically, this new CD picks up where The Dark Seeds Of Man left off. They take all what’s best in NYHC and blend it into some really tight, no bullshit hardcore. It seems to me the new songs are more complex and there’s a lot more going on in the song writing department. There’s definitely more progression over the last album in this matter. For example, No Compromise kicks off with a rockish beginning that builds up to a full blown hardcore in the middle of the song. At first, it was really hard to get used to this. I was expecting more in your face hardcore, but after few listens these tracks really grew on me. It just makes each song sound unique and gives each one its own identity. On there other hand, if you like it raw and aggressive, you won’t be disappointed either. Songs like Goon Squad, Scumbag or impressive Runner’s Song have what it takes to make you wanna kill and slam everything that gets in your way. This is all I expect from a good hardcore record and I really recommend this one for all the hate filled bastards out there!