Pound For Pound - Kill Yourself 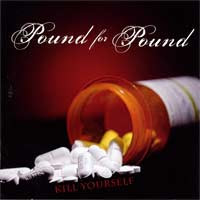 Pound For Pound - Kill Yourself
Filled With Hate 2008

If I’m not wrong, this is their third full length album and it’s safe to say that Kill Yourself is as intense as any of their past work. I know this type of stuff doesn’t appeal to everybody, but if you’re in the mood for some straightforward shit, you can’t miss on this one.

My first impression was that t his record is heavier then their previous work. You can definitely hear their typical sound that always made me think of bands like Madball, Death Threat or Strength For A Reason, but this time the mosh parts are more often and at times they even sound like 100 Demons or Merauder. But don’t worry, it’s still aggressive and straight in your face as always. The moment you press play on the CD player, you are being thrown into bloody mosh pit and you better prepare for some serious ass kicking! Fuckin’ reckless, man! This is one of the bands that offer something I can relate to. Be it the style of music I love or the lyrics full of real life bullshit, that’s the type of album that makes you think why you love hardcore in first place. In a time when so many bands look at hardcore scene as just a career opportunity, it’s good to see a band that don't have to compromise the integrity of their music and is just doing their thing. This may be not the album that reinvents the wheel but this still a freat record and I will fight everyone who thinks different!