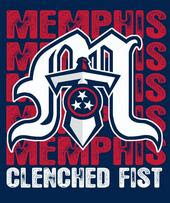 Just Like Roaches by Clenched Fist, the long anticipated follow up to the now classic Welcome To Memphis, will be released by Double Or Nothing Records.

DOUBLE OR NOTHING RECORDS is extremely proud to announce the signing
of Memphis hardcore icons CLENCHED FIST.

Forming in 1996, CLENCHED FIST will release its second full length
offering fittingly titled "Just Like Roaches" this Spring as an
exclusive digital download available through all major digital retail
outlets.

"Just Like Roaches" is the highly anticipated follow-up to their
classic debut full length CD "Welcome To Memphis" released in 2002
that single-handedly put the city of Memphis on the national hardcore
map.

Seven years later, the original Tennessee Titans return with a 100%
bullshit free sophomore release recorded at the world famous Ardent
Studios in Memphis, TN - the same studio where Led Zeppelin, ZZ Top,
Lynrd Skynrd, and Stevie Ray Vaughan cut some of the most legendary
records of all time.

"Just Like Roaches" contains 10 of the hardest tracks you're likely
to hear in 2009 and is accented by guest vocals from Scott Vogel of
Terror and Bryan Harris of Death Before Dishonor.

3 Unmastered Songs from the effort are currently available to stream
on the bands official MySpace page now.