Defeater to re-releases Travels on Bridge9 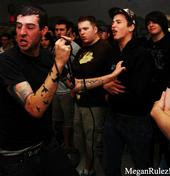 Defeater, one of the newest additions to the ever-growing Bridge Nine roster, is excited to announce their debut album, Travels, has been re-released on CD and vinyl via B9 today! Previously released via Topshelf Records, Travels was recorded by guitarist Jay Maas and has been garnering praise from press and fans alike, with Punknews.org claiming it hit a "new artistic peak for hardcore." Topshelf printed Travels on recycled materials for the original release, and in an effort not to waste usable materials, you will find a small sticker over the original packaging boasting the Bridge Nine logo.

Defeater has a wide array of influences and at first listen, you'll hear tracks reminiscent of Botch and Deadguy mixed with traditional hardcore. Ethically influenced by bands like Fugazi and musically by Minor Threat and Modern Life Is War – Defeater is no copycat band. Jay said, "We have been careful to know where we are going before we start driving there. It's important to us to flesh out mood and place instead of just blindly sitting down with my guitar hashing out riffs." He continues to say, "…I wanted to make a record that you could get into even if for some reason you don't care about the meaning behind the lyrics, but at the same time I wanted to make sure the listener to at least knows that there is more going on lyrically than a bunch of non-interconnected thoughts and emotions."

In support Travels, the guys of Defeater are preparing to hit the road this spring for a month long tour with label mates, Energy. The tour spans from March 15th-April 18th, starting in Massachusetts, hitting the West Coast, and bringing the guys back to Boston just in time for New England's Metal Fest. Aside from touring the US, plans to cross the pond are also in the works.