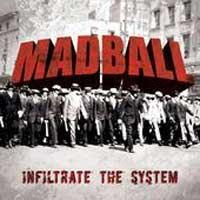 Not many of the hardcore bands that started in the 80’ still know how to rock this shit today. Madball are one of the few that have been releasing new records for about 20 years and still keep it tight. Infiltrate The System is an album that stays loyal to the rules of the genre but at the same time brims with fresh ideas.

It starts with We The People and Infiltrate The System, two adrenaline packed hardcore anthems and my favorite songs on the album. They pump up the adrenaline level high since the beginning and never let go till the last song comes to an end. Madball still creates a brand of hardcore that sounds aggressive and fresh and they simply leave all the competition behind. It’s as fast, angry and straight in your system as you would expect it to be, but at the same they know how to pack their songs with hooks and catchy riffs. Lyrically, it takes you on a ride into the real world of today with its conflicts, media control, corrupted systems and injustice. The real life stories and hardcore scene topics are still present, but the socially aware themes set the mood for the album. Don’t get me wrong, it’s not that they’ve become political band, it’s just that you can hear they have matured over the years as far as the lyrics are concerned. To be honest, I’m pretty sure most of you heard this record already so let’s keep it short. Infiltrate The System is an album that deserves a listen from anyone who claims to love hardcore. Madball still remain unbowed!