Settle The Score - Back To The Streets 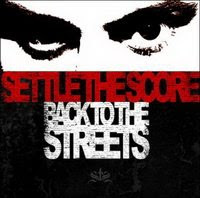 Settle The Score - Back To The Streets
MindTransplant 2008

I remember the first time I’ve heard Settle The Score it was on their demo tape released on their own label, Spill The Blood. Damn, how heavy it was! Now, few albums and splits later, this band is still going strong and heavy.

Settle The Score strikes back with renewed energy and nerve. As with their previous records, you can expect a lot of adrenaline fueled hardcore. I know it’s nothing groundbreaking, but you just can’t deny they got some serious power in their songs. The whole album marches on with aggressive vocals, heavy riffing and highly moshable grooves. The best songs are Welcome To My Crew and Family, which happen to be the opening and the closing tracks. First one is heavy stomping hardcore with crushing riffing and solid rhythms. A very good album opener. The later one has a crazy hook in the chorus that immediately sets it apart. One thing I noticed is that with every record they seem to pick up a pace a little and lean towards more NYHC style. Breakdowns are few and far between but it’s a change for a better in my opinion. The production is clear with every instrument easily audible making it easy to hear what's going on, but at the same time it’s thick and juicy. Overall, this is a good album, played as tight and forceful as it should be in this type of music.