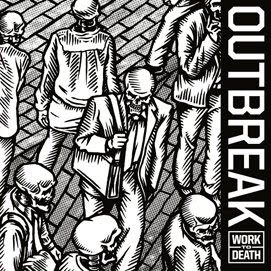 Bands surviving over five years is almost unheard of with the quick turnover rate in today's independent music scene. Outbreak has managed to overcome this obstacle, all the while battling lineup changes and still managing to tour on 5 of the 7 continents. Global touring with a frenzied live show is what's contributed to Outbreak becoming a household name in the punk/hardcore world.

With no signs of slowing down and in preparation for a new full length coming later in 2009, Outbreak and Think Fast! Records have teamed up to release the 7” single/digital download entitled “Work To Death”. The effort is a mere taste of what's to come in 2009. Expect the fast and frenzied punk/hardcore you've come to expect from Outbreak, with equal flavor from the more recent releases, all the way back to the beginning, and of course with a fresh appeal that you've come to expect with each Outbreak release.

"It's been a couple years since we released anything new, so we're excited to finally have something for everyone to hear. Basically we've been working on a new album, and in the meantime decided to put out a couple of the songs on vinyl. We wanted to get something new out there soon, and rather than wait for the entire process of the album, we figured it would make sense to do something sooner and closer to home" - vocalist Ryan O'Connor, who also co-owns Think Fast! Records.

"Work To Death" hits record stores on June 9th. If you're not a vinyl fan, you can pick up the release on iTunes and through most other popular digital retailers. Pre-orders will start toward the end of April through the Think Fast! webstore including colored vinyl combinations, an exclusive Outbreak t-shirt, and to top it off, all pre-orders will come with a free digital download coupon.

To celebrate the new release, Outbreak will be taking to the West Coast in late May/early June with the Cro-Mags. More headlining dates surrounding the Cro-Mags tour will be surfacing shortly.