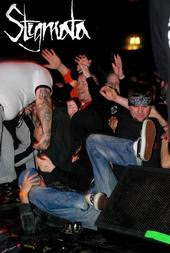 I Scream Records is releasing "The Wounds That Never Heal", a re-issue of the Stigmata albums "Hymns For An Unknown God" and "Do Unto Others", on June 9th 2009, the year Stigmata is doing a few reunion shows to celebrate their 20th anniversary. The band officially stopped performing in 2001 (although doing 2 exclusive shows in 2005 and 1 in 2008) and Stigmata alumni have gone on to make big musical waves with the likes of Shadows Fall, Murderers Row, Great Day For Up, Dead Rabbits, Crisis, to name a few.

This is a collection of two hardcore legacy, hard to find albums with a total of 20 solid, in-your-face, no-holds-barred hardcore tracks, and 1 extra bonus track, all for the price of one CD!

Stigmata ruled the Upstate New York hardcore and metal scene with their street smart, musical urban warfare and have developed a strong and loyal following in the underground hard music scene.

This is without a doubt THE album that can get the job done if you are in need of a heavy music fix with attitude!!

Stigmata will play with the original line-up at the 2009 Black 'n Blue bowl on May 30th in Brooklyn, NY. Make sure to go check them out!