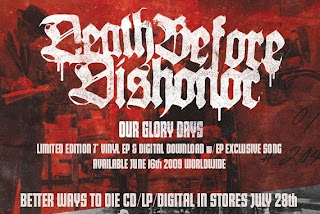 Death Before Dishonor and Bridge Nine Records are proud to announce the release of a limited edition 7" EP and digital download titled "Our Glory Days" on June 16th. Featuring two tracks, "Coffin Nail" and "Our Glory Days" (featuring guest vocals from Mark Unseen), from the group's upcoming album, "Better Ways To Die," and an exclusive song only available on this EP, this is the first taste people will get of what Death Before Dishonor is set to unleash July 28th.

"Better Ways To Die" is Death Before Dishonor solidifying their name as one of the front-runners of the Boston hardcore scene worldwide. Somehwere between the harder punk edge of Rancid, the working class anthems of Dropkick Murphys, the hardcore attack of Hatebreed and the precision and fury of Slayer, Better Ways To Die truly is the sound of an American hardcore band that knows their roots and history-and they're not afraid to step beyond that.

The band is gearing up for a worldwide onslaught of touring. Starting in the USA with the 10 for $10 tour-along side Poison the Well, Madball, Terror, Bane, VOD and more. Then off to Europe August 6th and then it will just keep going as always.