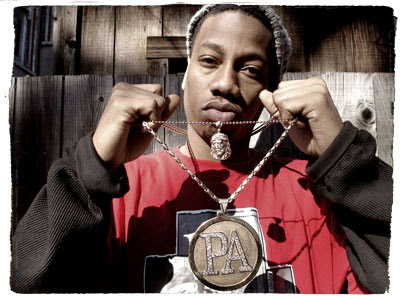 Do you think hip-hop has gotten too nice?
Planet Asia: I think hip hop has turned gay. These dudes are walking around feminine. When I come home, my woman is soft, I am the hard one. You shouldn't be a petite ass dude. That goes to all of them tight jean niggas. Back in the day when you looked unique that meant your music was unique. Now motherfuckers look unique but their music sucks. We were about gear too, but we were about skills first. If you see someone rocking some tight jeans, they are rocking that emo shit. Fuck that emo shit. There is an unspoken manual to this shit and everyone out right now is totally disrespecting it.
A lot of what you are describing seems to reflect the whole hipster-hop movement.
Planet Asia: That shit isn't even hip-hop. If you are signing and your shit sounds like a house record or alternative record that could be played on a station other than Tony Touch's radio program or DJ Mugg's Soul Assassins, then your shit is gay. If I walk by a fag club and they are dancing to your music happily, you are a fag rapper. I just call it how I see it. Also, thank god for the Internet because it is just a big screen for cats to just play themselves. That's why you don't get many blogs from Planet Asia or my girl all in the video. I don't want you to know who my real girl is. My chick is sacred. These rappers are killing themselves as artists because they have no mystic. Shut the fuck up. Make people wonder. A lot of these rappers are taking themselves out. That's why you have to give respect to Pete Rock because he doesn't have to work with Planet Asia. That's why you have to give respect to Muggs because he doesn't have to work with Planet Asia. They are doing this shit for the silent code.
Source: Urb Magazine

What's your take on this one?