"Just look around, inform yourself about the basic concepts of freedom, read any test of sociology and history and you will also recognize that we live in a kingdom of torture. Nothing is hidden really,everything is there,all the informations and all the answers...."

How are you feeling about the Kingdom Of Torture now that it’s out?
Of course we feel pretty excited, we got together only this October so for us it is a great achievement to have a full length out in such a short period of time.We are also really curious about how our message will be interpretated by the people.

What makes this album significant and what can kids expect from it?
This album its a real album with a real message.It is the expression of real feelings and real friendship and commitment. The HC kids can expect an album made of pure aggression and a message made of pure facts. Good old mosh like we grew up with 13 years ago but with some "modern" inserts as we don't want to remain slaves of our past. Hardcore,Thrash,Mosh & Beatdown,this is what you would find on the menu if our album was a "Cocktail". 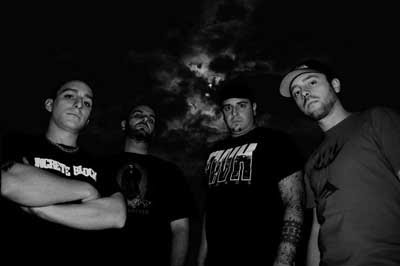 Could you describe the sound of your new record?
Powerful.Working with Daniel Giordana was a great experience for us.And what would you expect from a producer that spent most of his time on the road with Hatebreed,Madball and many others? We recorded everything in less than 24hrs and then basicly without guidelines Daniel added all the ingredients we were wishing in an album. We are totally satisfied and our next album "REIGN OF TERROR" will be produced by Daniel for sure.

How does it differ from what you were doing with your previous bands?
It depends.For me personally (Luca) not much. I used to play in mosh bands or metalcore w/breakdown bands and i am the lead singer of SAMARITAN,so maybe i would say the only thing for the 4 of us is that in this band the "ignorance" is at the maximum level. We don't have much time to come up with something different as we live at huge distances from each others but also we think that this is the best way to get to the kids. As the UK band Your Demise says "Ignorance never dies"....and that is the truth!

How did you come up with the name of the album?
Just look around,inform yourself about the basic concepts of freedom,read any test of sociology and history and you will also recognize that we live in a kingdom of torture. Nothing is hidden really,everything is there,all the informations and all the answers....but in this system we simply don't have the time to retrieve those informations.

What was the overall concept?
Kingdom of Torture is a concept album that speaks about the silent enemy who enslaved the human race.This enemies are not alien reptiles but an economical system based on the debt that put in chians our souls and lately our bodies as well.

Is there a theme that runs throughout your lyrics or music?
You bet.And through our merchandise as well. A few people are deciding for the mass and they are truly convinced that their decisions will save the human race. We are just human batteries that are placed in a social mechanism to serve the machine. Our life in general has no value at all or it has no more value than an object. We are still in time to react to all this and the best thing we can do is to sensibilize other humans on what is going on around them hoping that sooner or later we will be a sufficient number to start a rebellion ,NOT A WAR, but a rebellion to free our minds and our bodies and to live our lifes by ourselves.

What is happening nowadays it's just the result of a precise plan” – could you expand upon it a little?
Eh eh eh ...it would take me 3 or 4 pages to do that but i will try. Thousands of years ago already a plan was developed in the way that the keepers of the hidden knowledge would remain secret to the masses.A few will decide for the others in order to control and preserve the human race.The objective is not money but power,control and many things can be used to achieve this.The most smart ones historically were WARS, and the creation of the CHURCH ,followed by the division of the Religions. With the developement of the human race and mind those instruments were not sufficient anymore and so the modern Social Machine was created.The latest smartest move of all was the creation of the FEDERAL BANK in 1913.This monetary system related to the social system finally put in chains the human race.The smartest thing of all is that in ALL cases were the human themselves to ask for it ,driven by fear.Who asked for the FED? The population..Why?Driven by the fear of an economical crisis created by the bankers themselves. Lately....who asked for the patriot act?Who asked for cameras everyewere,for the control of private communications,for the chip implantations? The population...once again driven by the fear of terroristic attacks made by the governaments themselves.People has to win their fears,wake the fuck up and see who is the real enemy.That's why EMBRACE DESTRUCTION exists and that's why at our age we still make albums and play everywere we can. 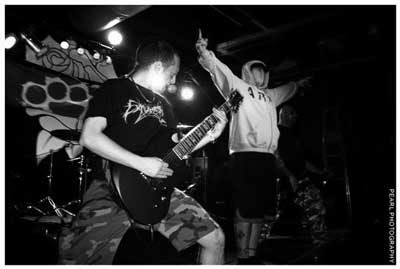 What do you mean by that and who do you think is pulling the strings?
I mean that they achieved so much control that they don't need to hide anymore.Nowadays everybody knows who is part of skull and bones and who is part of the Bildenberg group.But nobody says anything. Everybody knows that the privatization of the water was forced to the 3rd world countries by a small number of private bankers with the promise of reducing the national debt,as everybody knows that the codex alimentarius will control every type of food that humans will consume. Isn't it enough? It should...but think about this also.When you are squeezed in a life in which you need to work as an animal just to survive,when you need to pay mortgages for houses,cars,fridges and everything else...who do you think have the time to think about things like that?
This is the apology of the control,this is why they are winning.This is why is our responsability to sensibilize people.

What emotions do you hope the band’s music evokes in listeners?
We tried to keep our lyrics as much simple as possible but EVERYTHING is documented.We also send bulletins on myspace with video informations.So we hope that our music will drive people to think with their own mind,to get to their own conclusions. It can also be that the conclusion is " this 4 guys are 4 fucking crazy nuttcases" and we will accept that as long as someone rediscover his individuality,his own thougths. This is also what we do during our shows,we don't want to force people to think about certain things talking for hours on stage.THIS IS WRONG.But our message is so clear and documented that is not easy to escape ,is not easy to don't stop and think just for one minute.And if this happens we achieved our goal. You don't even know how happy we are when we receive mails from guys from all over the world that ask us to explain them what we mean in this or this other song.There is still hope!

So what is your label situation?
We really cannot complain.Kingdom of Torture will be released in Europe,USA and Indonesia so far. We are still looking for releases in South America,Australia,Asia and Africa.

Why is your record being released by 3 different labels?
Actually as we speak the labels are 5 and we hope that the number will increase during this year. The reason is really simple.For us the most important thing is the message.So if we release with one label the distribution wont be able to spread the message as much as we want.Also if a label lets say in South America wants to release our cd they will need to buy the copies from a European distributor and with their economy this will kill them.
What we do instead is to offer our master (of course for free|) to the different labels interested so they can print the cd in their own countries at their own prices,we think that this is the most fair thing to do and also is the best thing to do if you want your message to be spread all over. As we said we hope to release also in countries that nobody cares of...we do and we do allot. 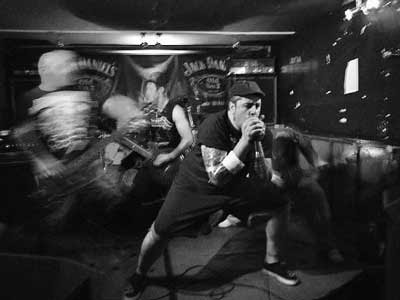 Your album will be also released digitally. Do you see MP3's as the way forward? Do you think CD's are still relevant?
We signed with Believe Digital because they can spread our message really everywere. For sure the MP3 will be the future and the present of the music but we still think that the CD is still important.In this digital world made of No Contacts and Virtual Realities it is still important to "touch" a cd,to open it and see the booklet,to feel what the artist want to transmit to you.If i like a band i want their cd no matter if i have the all discography in my IPOD.

Embrace Destruction consists of members from Italy and Holland. How did you guys find eachother and decide to start a band?
We know each other since a long time.We never had the occasion to play together.So it was easy for us to decide to do finally something together ,to share our ideas in a common bond.It was the right time to do it...for all of us.

Has the fact that you guys come from different countries been difficulty throughout the making of the band?
Not really.With the technology nowaday distances do not exists anymore.We write everything on the PC and we talk in conference via skype.I think we reharsed 3 or 4 times in total.We already wrote half of our next album,soon we will place an home recording on myspace. For the rest..we are not afraid to drive.We made so many kilometers during our tours with the other bands that driving 1'000km is a joke,even better if you can take a cheap flight eh eh eh.

Any plans of a tour or shows this summer to promote the new album?
Indeed there are.Kingdom of Torture Euro Tour 09 will start in August 7th.We are booking all the shows ourselves as we do for the rest of the things that regards ED.We are lucky enough to have a crew of friends that believe in what we do and in what we say and they help us allot. We want to do this tour to spread our message as much as we can and to give exposure to our cd as some labels are putting allot of effort into us,we think we need to give them something back.Many shows are still available so don't esitate to contact us.

Any major plans for the rest of the year?
We will record Reign of Terror in the spring of 2010 and we will release it in October/December 2010.It will be even more violent than Kingdom of Torture and we will try to talk about other topics always related to our beliefs. For the rest no major plans,we don't want to dominate the HC world ,we don't want to be the next "this" or the next "that" as we are too old for this crap.We just want to keep doing what we do best=tearing down stages. Come and check one of our shows to have the live proof.
Thank you guys for the space that you gave us here and for supporting the HC underground scene.If some of you readers are interesrted in our message please contact us on our myspace or google WILLIAM MILTON COOPER.