Still Proud Clothing is an upcoming brand which should appeal to both hardcore and hip hop kids. So far, the designs are amazing! The guys who run it have been around for some time so you know that when buying their stuff you're supporting the scene not some new jacks trying to cash in on hardcore.
So first of all, what inspired you to start your brand?
I was motivated to start Still Proud Clothing after some years of involvement in the hardcore scene. I’ve been in bands, booked shows and also ran a music section for my college newspaper when I was in school. Clothing seemed like the next logical move as I like the fact that it has the power to convey such a powerful message and I also felt that I could bring something different to the table with SP. 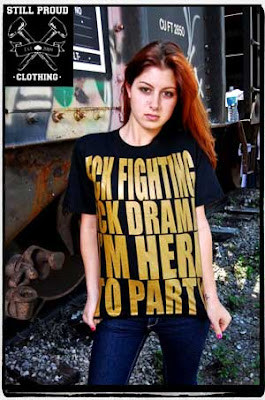 How do you think your designs stand out amongst the plethora of other hardcore brands?
While there are many clothing companies out right now, I don’t think that many of them have as wide approach as Still Proud. Most are geared towards certain niches ( straightedge, posi, etc.) whereas with SP, I’m aiming for the hardcore and hip-hop scene as a whole. Our designs are merely observations of the different walks of life within our scene.

Who creates the designs for the shirts?
I (Gavin) come up with the concepts and have a graphic designer with Mammoth Graphics translate them into the designs you see on the shirts.

Is there a theme to Still Proud Clothing, such as SxE or hardcore, or you’re open to various ideas?
Still Proud will always be a brand rooted in the Hardcore and Independent Hip-Hop community but that does not mean it’s exclusively for those individuals. I decided to go with the name Still Proud because pride is very much a strong attribute in these genres and regardless of your cause (god-free, posi, christian, straightedge etc.), it is something that everyone can relate to. I put out clothing for individuals who are strong willed and passionate about their beliefs no matter where those fall. With the first release, I was looking to make a bold statement and based upon the responses so far, I think I’ve made a mark. There will always be people who disagree and I’m not expecting everyone to catch on but those that support us get what we are aiming for and for that I’m very grateful.

Can you give us the meaning behind Keep Metal Out tee?
First off, I will say that it’s all a matter of personal preference that we can argue all day long and thus you will either love it or hate it. When I first got into hardcore, metal was starting to really saturate the music and take it away from its punk foundation and I know that there are many people tired of this, which is why we put this design out. Obviously, metal has made its mark and is not going anywhere, but for those that want to make a statement for the latter, have now got an outlet to do so. That’s not to say there are no bands out there past or present that merge the two well, but overall I’m sure we can find some common understanding that hardcore has changed which metal (among other things) appears to have more than a hand in. 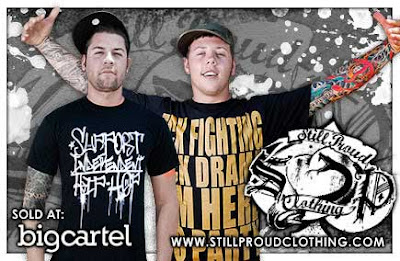 What is your personal favorite tshirt design (done by you) and why?
My personal favorite design would be the FCK Fighting shirt. Fighting at shows is always a problem and having been a promoter and lost many venues to it, I wanted to create something to convey my feelings on the matter. It also has a broader appeal and can be wore in just about any setting which is why I wanted to release it and based upon that observation, has shown to be one of our best sellers.

What are some of the bands you are working with and what was the reason to choose them?
We currently have three sponsored artists: Outerspace (PA), Knock Em Dead (FL) and Thick As Blood (FL). I decided to sponsor these three because besides being fans of their music, I know that they are hardworking individuals that mesh well with what we are trying to do. I’ve personally known Knock Em Dead and Thick As Blood over the years and have watched them grow to the level that they are currently at and Outerspace drew me in because of their awesome sound and appeal. The artists I sponsor don’t need to be exclusively hardcore but as long as they embody that sentiment , have a hard work ethic and are pushing the envelope , I’m likely to work with them. 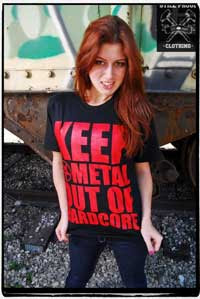 What has been the hardest part of this business? The best?
The hardest part about running a clothing company is the amount of time it takes to market the designs. I literally spend hours online through the various social media applications (Myspace, Facebook, Twitter) spreading the word about SP, but being unemployed at the moment has allowed me to get it off the ground. The best part is certainly running your own business and interacting with like minded individuals on a day to day basis. This music has been an integral part of my life for some years and being able to give something back and see people’s positive reactions, in itself is rewarding. So far, the companies started off on the right foot with various orders coming in from around the world (including a recent purchase of 18 shirts to Japan) and of course support from the U.S has been solid and is gaining ground regardless of the grim economy we’re all facing.

Are you sticking with shirts only or will you expand?
I have a lot of plans to expand the line to other articles of clothing such as hats, sweatshirts, b-ball shorts in addition to better quality fabrics but first and foremost I need the help of our community to get there.

What else can we expect from Still Proud Clothing in the future?
You can expect to see SP everywhere as we are just getting started. I’m planning to work with bands across the globe and even have some design ideas in the works with certain organizations that I think many in this scene will appreciate. In the meantime, please visit our store and pick up some t’s: http://stillproudclothing.bigcartel.com/. Every order comes with a custom SP hangtag sticker and I’ve also partnered up with some awesome record labels (Thinkfast, Rhyme Sayers, Significant, Caboose (Japan) and Deathwish) which have given me some rad extras for my orders. Also note that we ship WORLDWIDE!