Go For It! - Reading Between The Front Lines 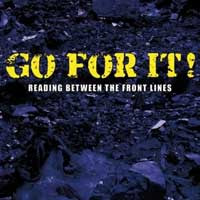 I had never heard of the band before this review and I must say I was pleasantly surprised with what I found. A lot of music here may well be what you would expect from an old school hardcore album – some NYHC influenced grooves with typical fast parts and breakdowns now and there.

I was personally very fond of the tune of the album, because while staying true to the roots of hardcore, it does have a decent punk rock and metal influences which adds a right amount of heaviness and aggression. There are 8 tracks here which clock in about 16 minutes so they keep it tight. The production is heavy giving the songs pretty beefy sound. The compositions in themselves are generally fine with some hits and some misses. One of the things I didn’t like is the inconsistency of the album – the good moments broken up by the not so good moments. It doesn’t bother me that much cause the record is short enough not to get boring but they should work on it when writing the stuff for the next record. Generally, Go For It ! is a good example of a band not trying any new tricks but getting the most out of a simple concept. Reading Between the Front Lines doesn't contribute with anything that hasn't been done by others by despite its flaws, the album possesses many high points and is worth checking out if you’re an old school fun.

Go For It! at Myspace