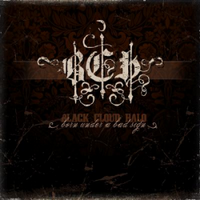 Black Cloud Hate is not your average hardcore band. To be honest, at first I was a bit skeptic about it. I mean, most of the times when hardcore bands try to incorporate hard rock sound a’la AC/DC in their music there’s a lot of promise but the overall outcome turns up to be a totally unlistenable pack of hippie crap. Fortunately, as soon as I’ve heard the first notes on this CD I knew this one is going to be something different.

Born Under a Bad Sign, same name as a blues album by Albert King, is a perfect blend of hardcore and punk with hard rock, rock’n’roll or even blues influences. To be honest, the hardcore element can be found mostly in the way the songs are structured while most of the music is strays totally into rock territory. It takes a lot of effort and originality to stand out in today’s hardcore scene and I think Black Cloud Hate menaged to do it. This album has the perfect blend between nice melodies and rough edges. If I had to pick a comparable bands I would go for a softer version of Killing Time or Blood For Blood for the core side, and bands like AC/DC and Rose Tattoo for the rock side. My only complaint is I wished the music was a little bit more aggressive sometimes but I guess that’s the deal with what they wanted to create on this album.

It happens every once in a while with hardcore that when everything seems almost stale and predictable some band occasionally breaks out and lets us know there’s still something fresh to it. Even though it’s not too ground breaking, the band deserves a credit for being original and coming up with their own style of doing music. Not a type of album you would mosh to but certainly a good listen for a nice headphone session or just driving around.