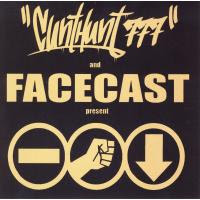 Brutal breakdowns that make you wanna go out and beat the shit out of somebody? Check... Metal riffs and ruthless drumming? Check... Mean and angry vocals? Check... Clean girlie vocals?......Not quite, and that's what you want when picking up an album like this. Face Cast and Cunthunt 777 have followed the do's and don't's about making a beatdown hardcore because this shit sounds so damn slick and brutal. Like most music of this style out today, it will be exciting to some and ridiculous to others but if you can appreciate some raw and metallic hardcore this is something for you.

The first band on the CD is Face Cast and no doubt they are the heavyweights in the game. I’m not talking about the music only. The band’s delivery depends on the slow to mid-paced groove mainly and is no way something new or original, but they got some decent ideas and the overall feeling is positive. The singer is spitting heavy gangsterism with song titles like Wifebeater or She’s Got a Dick so if you like some cocky lyricism mixed with brutal honesty, this is your thing. Face Cast is one of the bands you either love or hate and I can imagine some people might just hate their attitude but it’s all good with me. Musically, it reminds me of bands like One Second Thought, only it’s slower and much more metal. The one thing that bothers me is lack of diversity. I’d like to hear some change in the band's sound throughout the songs.

Cunthunt 777 is next with their metallic beatdown delivery. The way their handle their music makes you immediately know they’re from Germany. It has the same vibes as Embraced By Hatred, Fallbrawl, In Blood We Trust etc. That of course leaves very little to the imagination, but I doubt the band planned it to be otherwise. Compared to the Face Cast, their music is more vital and complex, with more tempo changes and cleaner sound. Toss in some brutal and mean lyrics and the result is a textbook example of what beatdown should be. While there is nothing spectacular with this band and they lack a sense of innovation, it’s still a strong slab of aggressive hardcore.

Bottom Line is, this is another beatdown album. If you're looking for a bunch of fast circle pit parts and complex lyricism then this is not the album for you and if you think this style is pointless and plain stupid, I doubt this stuff would change your mind. Me, I like it and like their fuck the world and let’s piss everyone off attitude. This is strictly for the beatdown kids who can take a joke.