"I would hope that those kids follow the trend that the hardcore scene actually took back in the day and just morph and evolve rather than change completely or drop out."

Active since: The band formed out of the ashes of another band called the red tops. the name HTK has been used for about 4 years now.

How do you define your overall style?
Oldschool nyhc with a slightly heavier side. 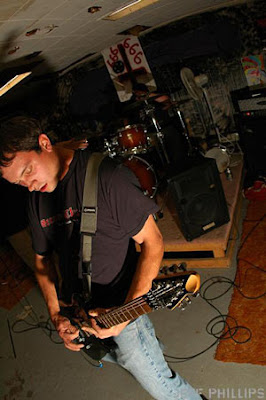 What’s your goal with this band?
Play music and have fun. we have all been in other bands and had less-than-desirable outcomes of our efforts. This is hopefully just going to be a good time.

What do you have recorded so far?
Besides some earlier demo stuff, we are in the studio right now finishing up the "you're beat" 7". this will be the first official release for the band.

How did you all come together to form the group?
Tony and soda played in the red tops together for years. I got kicked out of the band i was in about a year ago and a few months back they asked me to start playing guitar. my old band had played with the tops numerous times and we were all friends from the general hardcore scene.

Your new 7” called You’re Beat is finally out. What kids should expect from it?
It actually isn't (unfortunately, haha). it was supposed to be so ideally you should be right, but we are working on fine-tuning things. when it is out (hopefully in the early fall), expect a fast and hard 7" that will get your head bobbing and be easy to sing along to.

What bands influenced your sound and how would you describe your music to someone who has never heard you before?
Older new york bands. Think burn meets madball meets inside out. It's a decent cocktail of the older hard-style of hardcore. 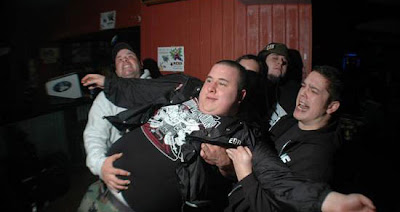 Lyrically, where do you find your inspiration?
Tony writes from the heart. whether it be about the hardcore scene, being an oldhead or simply just personal anguish. he writes real-deal shit for music that matches it.

What are your thoughts on current state of hardcore music and the scene? What excites you about hardcore in 2009?
Well the simple fact that hardcore is still alive and well is pretty exciting i suppose, haha. there are a lot of kids stoked on older hardcore in the area i come from. trends like this are quick to come and go though. i would hope that those kids follow the trend that the hardcore scene actually took back in the day and just morph and evolve rather than change completely or drop out. we shall see. In PA we have a long legacy of sincerity and heart and that is something that still holds true to this day.

What’s interesting happening in Pennsylvania when it comes to hardcore? Any good new bands around?
Always something going on. staples like SFAR and WIC have released or are about to release new shit. bands like mother of mercy from doylestown are doing really well on the road and at home. CDC just got back from playing fucking Israel and is the first DIY hardcore band to officially play the middle east...so PA has that flag marked, haha. central pa is producing some decent bands again. check out weight of the crown and steel nation for sure. xrepresentx from erie just got back from 2 months in europe and they had a blast. This Is Hardcore fest just happened a few weeks back in philly and it was a complete and total success. every day sold out i believe, and every band played and everybody had a good time. On the whole, things are awesome in the commonwealth of pennsylvania.

You guys seem to be very active when it comes to playing live. How many shows have you played so far? What was the most memorable one?
Ironically enough, i have only played 2 shows with the band, haha. before that they only played a handful of shows so there isn't a whole lot to go buy. the first show i played was at mojo 13 in delaware and it ruled. all our friends were there and some friends from out of town as well, like folsom and lionheart. 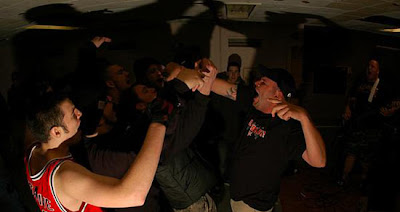 Do you prefer bigger venues or smaller clubs?
Smaller clubs all the way. big venues are for losers.

Adidas vs. Nike?
Adidas, although i am definitely rocking a pair of nikes right now. i have always been of the persuasion that shoes are probably the least important thing to care about in like, the world.

What's next on your agenda?
Get this 7" out on my label (get this right records). play some shows locally and hopefully hit the road in a few months if shit goes well.

Any additional comments or shout-outs?
Our dogs are awesome. word up to blue, mickey and snoop.

Check out Hard To Kill at Myspace:
http://www.myspace.com/hardtokillhxc