How do you define your overall style?
Straight to your face hardcore..with some parts that will make you want to shake your ass and move your feet hah

What’s your goal with this band?
To see the world! For free! lol

What do you have recorded so far?
We recorded our 2008 demo and we're making our e.p as we speak. 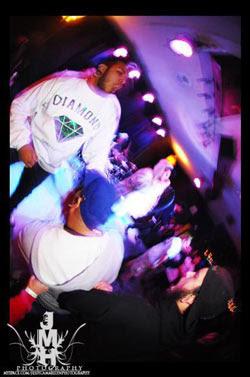 Can you introduce yourselves for our readers and let us know where you are from?
I'm Byron the guitar player, Martin plays bass, David and Cesar sing and Felipe AKA Fifi plays drums.

How did you all meet and how long have you all been a band?
It's a very complex and complicated story haha. To put it simple we all met through our previous bands. I kind of grabbed the best guys from all the bands in our area and formed Heavy Hitters.

So how far are you with writing the songs for your debut album? When will it be ready and what kids should expect from it? How realistic is a new album release before ’09 comes to a close?
Well we have 7 songs written for it already. There are some labels interested in releasing the album but we're going to wait on what they say to determine when it will be ready. Well we have gotten a much heavier sound than from the demo. Much heavier breakdowns and a lot of bouncy parts, but I'm making sure we still keep a lot of punk/old school hardcore sound in it. As for the album coming out before '09 is over...I don't think it will happen. But we do expect something new to be out by Spring of next year.

How do the new songs differ from your demo?
They're kind of different but the same at the same time. We're keeping the old sound just adding new things to it. We're already playing some of the new stuff live and everyone is digging it so we know everyone won't be disappointed.

One of your posters says Firestorm Records, but the myspace profile says you’re still unsigned – so what is your label situation?
That's also sort of a weird situation heh. We're on the label but other labels have hit us up and want us to sign with them. Firestorm Records is more of a management company. They get us shows and help us promote our music and things like that. Shout out to Pat! 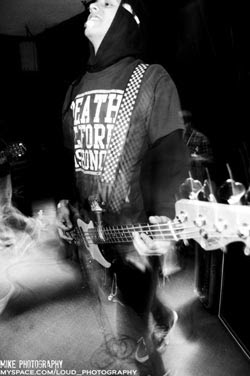 Are there many labels in Cali interested in bands like yours? In other words, is it hard for a hardcore band to release an album over there?
I would say it's pretty hard to get signed by a label out here. So many bands sound the same here and are doing the same things to the point where no one really stands out. Of course there are many exceptions but for the most part I think it's hard. As for us, we're trying to stay away from the common local 'hardcore' sound and trying to do different things to stand out from everyone else.

How did Eddy and Ant from Skare Tactic doing guest vocals in your songs came about?
What are some other bands in LA scene you’re friends with? Well I met Ant online sort of. He owns a screen printing company called SolidBondInc. He knew we needed merch so I asked him where he lived and he ended up living down the street from me! We been kicking it ever since. I met the nigga Eddy through Ant. We needed someone to play drums for our recordings and Eddy offered to do it. Since then they have both been close homies with the band. We're also great friends with xfacebreakerx, Countime, Few Will Follow, No Reprieve, The Boondocks, Xenocide and a lot more niggas.

Who are your influences? What bands do you look up to?
Terror, Madball, Death Before Dishonor, Trapped Under Ice, Skare Tactic, Fight Like Hell, just to name a few.

Lyrically, where do you find your inspiration?
From life. Also haters, back stabbers, two faced people and more b.s

How many shows have you played so far? What was the most memorable one?
I'm going to say around 50 shows. The most memorable was either the CDC, Folsom and Call To Preserve show at Chain Reaction or the show with Thick As Blood and Lionheart at the Cobalt. Both were great shows for us.

What is the worst fashion you’ve ever witnessed at a show?
Oh mannnnn there's so many! The long hair, the over tight pants, bandannas, skunk colored hair, the fucking puffy old man penny loafer looking shoes. Shit man I'm just getting mad talking about this...NEXT 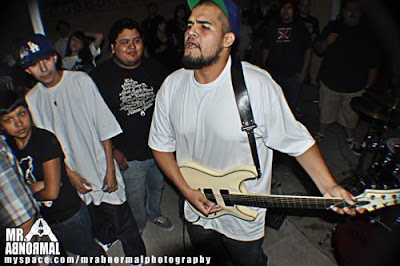 What can we expect from you guys in the future?
Everything! More merch, more tours, more albums, more sexy, more everything!

Any additional comments or shout-outs?
Umm fuck everyone that doesn't know what real hardcore is. Shout outs to Ant and Skare Tactic, Jr and Countime, SolidBondInc., Firestorm, T.E, Forsaken, Eddy, Terence, Isaac (The Boondocks), shout out to Abnormal Clothing! Shout out to all the homies Dre, Kevin, Chris and XFBX, FWF, everyone on our top! haha. All the homies in the 818 and L.A. Keep it ARMBAR niggaaaaaaaa