Strength For A Reason - Burden Of Hope 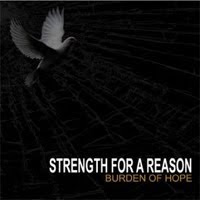 I’ve been a fan of Strength For A Reason for a long time and was really psyched when I heard the new record is on its way. Burden Of Hope isn’t a stylistic departure from previous SFAR albums and basically that’s the kind of album I was hoping to get from them. The band continues to improve their winning combination of powerful music and uncompromising, brutally honest lyrics but this time it feels like they’ve been given an adrenaline shot for good measure.

The content that they incorporates on this album puts them on a whole different level. SFAR is razor sharp at what they do, displaying a lot of intensity and aggression in every note they hit. Each song is delivered with lots of force and fury with the sort of unhinged aggression. You can sense the anger, frustration, and pain and the atmosphere it creates is unique but reminiscent of what real hardcore should be. The lyrics are a real down to life themes with a strong straight edge stance but band is not a militant in a way they try to force their way on others. Instead, it’s more like five dudes who are just proud of who they are and a lifestyle they follow. The songwriting here is a perfect blend of the of the styles known from their previous full length and the tracks are dense with powerful guitar work and pounding rhythm section with double bass now and then. The songs flow as naturally as they need to in this type of music and you can sense these guys know what they’re doing and what type of stuff they wanna create. What makes this so great is its consistency: there are no throwaway songs on this record and each one of them makes you just wanna turn up the volume and enjoy real hardcore done right. On Stand By My Side Mad Joe of Wisdom In Chains brings heat with the powerful anthem of struggle, brotherhood and hardcore pride. Other guest appearances include Martijn of No Turning Back, Dan of Cold World among others which brings some ‘we’re the family’ feel to this record. Good collaborations have been kinda rare lately in hardcore so I’m really liking it. To be honest, it’s hard to put a negative spin on this album. Burden Of hope is filled with plenty of real hardcore and brilliant moments. It’s a pity they didn’t make it to Poland on their last tour to Europe but I hope to catch em next time.

Filled With Hate/As One Records 2009

SFAR at Myspace
FWH Records
As One Records