Surge Of Fury - In My Tox City 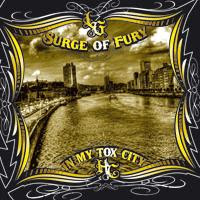 Every now and then, I find myself thirsting for dope hardcore album to set me in this ‘fuck the world’ state of mind with some vicious breakdowns and cocky lyricism. And when it happens, it’s good to have bands like Surge Of Fury dropping a new album that helps quench this thirst.

The records kicks off with a short, slow paced intro with the whole gang shouting ‘Surge Of Fury’ and this kind of lets you know what you’re about to witness here. Groove is indeed the name of the game and some parts of this album sound very much influenced by bands like Fury Of Five or Billy Club Sandwich. Surge Of Fury’s strength lies in the fact of how organic their mesh of NYHC vibes and breakdowns sounds. Let’s face the fact, metal parts and heaviness in hardcore are not a novelty anymore so it’s all about the delivery. There’s no point in reinventing the wheel, it’s just important that when kids are listening to your album, it flows naturally and the sound is not forced. Like, when you do a breakdown, do it for a right reason, which is giving a song a punch, not because it’s a hype to pack you album with tons of mosh parts. Hopefully, in case of this album it ends up sounding natural, and the band uses that to their advantage to amp up the heaviness of their sound to a level but never really loose the groove factor. No one would call this album cheesy the same way a lot of beatdown bands sound tacky now. Overall, the album is consistently great throughout with good hooklines, beefy sound and menacing vocals. I highly recommend picking up a copy.