Stigmata – The Wounds That Never Heal 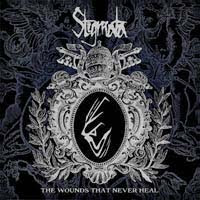 Stigmata – The Wounds That Never Heal
I Scream 2009

This CD contains two albums by now defunct Stigmata, Hymns For An Unknown God (1994) and Do Unto Others (1998) and if both of them ain’t classic, what is?

Stigmata is surely one of the bands that have left something that will stand the test of time. The band had a knack for confident and hard hitting song writing coupled with sharp lyricism. Their metallic hardcore with heavy thrash/crossover influences was one of a kind combining skilled guitar work with a rather unique vocal approach. I like this raw feeling of 90’ East Coast hardcore feel to it if you know what I mean.

Lyrically, this is the dark and pessimistic documentation of the human condition at the end of the 20th century. It’s about seeing the things as they are and trying to find your way in this hopeless and cold world. I wanted to write down some quotes but there are so many throat grabbing lines on these two albums that it’s hard to decide which is the most representative. Anyway, to really connect with Stigmata’s music and get the real feeling of this albums you need to listen to it from the start to finish.

If you’re sick and tired of hardcore getting too soft and too nice nowadays and want to take a trip down the memory lane when it had this feeling of something raw and dangerous, I suggest you pick up this record. If you are a real hardcore fan, then The Wounds That Never Heal has all you could ask for. There is just something so real and honest about these albums and it just gets better and better as the years roll by

PS. The reason why I Scream Records put out this record is the 20th anniversary of the band. Although they officially stopped performing in 2001, they’re doing a few reunion shows this year. Unfortunately. I’ve got no info about any plans of them doing a tour in Europe.