Crowd Deterrent are about to get some new music out 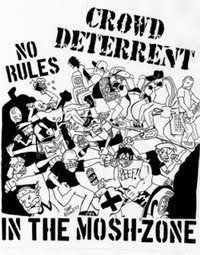 Crowd Deterrent dudes are not letting go and you're damn wrong if you thought they gonna stop. The band got some new shit waiting to be released and all the signs in heaven and hell show that it will give all the oversensitive dudes and fake ass shit talkers a proper heart attack. Here's what they got to say about it:
We have 5 brand new songs recorded and ready to go. No idea if we will release them as an EP, a split, or do a full length. New material is the early demos mixed w/ Blood and Family, there are songs w/ blast parts and more of an early demos era feel as well as Blood and Family type jams. We are also working on getting all the old recordings re-mastered and some re-recorded and re-engineered for superior quality because let's face it, some of those recordings sucked but they had good songs. Check out our new projact we are doing called RACE RIOT for some more straight up violence!