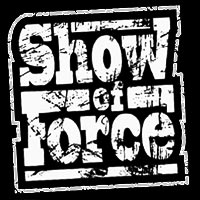 "The overall message is that this world is fucked up. It’s not just the constant threat of war or diseases that these so called governments are shoving down your throat. But you also have to deal with all sorts of day to day crap. I say burn it all down and start fresh."

"The overall message is that this world is fucked up. It’s not just the constant threat of war or diseases that these so called governments are shoving down your throat. But you also have to deal with all sorts of day to day crap. I say burn it all down and start fresh."

Could you please introduce Show Of Force to our readers? How did you meet and how long have you all been a band?

We’re Show Of Force and we’re from Holland. I’ve met this crazy French guy called Sebastien at work and he was into the same kind of hardcore as I am.So he said we should start a band. I called up Joost who I knew from our previous band and found a new drummer called Tijs. We started rehearsing in early 2007. The crazy French guy emigrated to Australia and Cas has since then replaced him.

Is it your first band or were or still are any of you in side-projects?

Joost (bass) and me (vocals) were in a metalcore band called Stone Cold that started in 1995 and lasted until 2002. We released a DIY EP and a full length album on Gangstyle records. Check out myspace.com/stonecoldrip for some tunes. We’re doing a thrash metal side project with some old members. Our guitar player also plays in a metalcore act called Burn Brighter check it on www.myspace.com/burnbrightermusic. And our drummer plays with himself in his spare time hahaha.

Your debut EP has just been released recently via Real Recognizes Real records. How do you feel about the finished product and the response it has been getting?

We’re satisfied with the end product. The overall sound is hard and aggressive. But we’re looking ahead and working on new tracks so hopefully we’ll be able to hit the studio in early 2010.
Reactions have been very positive thus far. Older guys recognize the sound and younger kids are enthusiastic because you don’t have a lot of bands around that still play this style.

Do you have a favorite song on the EP?

Sentenced To Death. It has this old school, even a bit melodic vibe to it but also has this pounding mosh part. Also the lyrics and the sample at the end came out really well.

How would you describe the lyrics on the album? Is there any message you would like to get across to the listener or it’s more personal stuff?

The overall message is that this world is fucked up. It’s not just the constant threat of war or diseases that these so called governments are shoving down your throat.
But you also have to deal with all sorts of day to day crap. I say burn it all down and start fresh.

Would you say the hardcore music is therapeutic to you, like you can have your say and just get some things off your chest?

Yes. I’ve been in bands since I’ve been 14 years old. And screaming your lungs out at least once a week is very therapeutic. I could recommend it to anybody.Also other band related issues that need to happen keep you busy. I don’t want to think about what I would be doing without it.

One thing that I like when listening to your songs is that it somehow sounds fresh at the same being deeply rooted in the traditions of the genre. How do you go about, when writing new material? Where do you try to find your influences?

Our main goal when we started this band was to bring back that 90’s hardcore sound which we all grew up on. But at the same time have that brutal hardcore sound you have nowadays. Joost comes up with the music and I write the lyrics. Influences are of course NYHC bands like Madball, Killing Time, Cro-Mags, Bulldoze, Breakdown, Merauder....etc. But also that Cleveland sound from bands like Integrity, One Life Crew, Ringworm. Basically bands that make you want to destroy everything around you.

Your EP is distributed by Allhiphopshop.com. How this collaboration did come about?

The owner of Allhiphopshop.com used to play guitar in our old band Stone Cold. We always kept in touch and in the meantime he started to sell hiphop and hardcore albums through his shop. Eventually he also started Real Recognizes Real records and he put out records for Danny Diablo and the Shotblockers.
Then we recorded our EP and he offered to bring it out on RRR. He’s got all the contacts so that’s very helpful. Also check out the new albums for Grizz Rock and Skam Dust coming out soon on RRR.

How important is playing shows for the band and basically giving a good performance? Are gigs more of the fun or rather hard work for you?

Very important. You can be the tightest band in the world but if you don’t deliver on stage you might as well go do something else especially in hardcore. I remember the first time I saw a hardcore band on stage it blew me away. Before that I only saw metal bands but those dudes mostly stand there banging their heads. Cool but not the same. We want to keep it fun and want to play shows with hardcore bands and a hardcore crowd. So we’re more picky and don’t play every shit hole for a couple of bucks each weekend like we did back in the days.

If you could put together a show with any band of your choice, what would this band look like?

Killing Time with Anthony Comunale on vocals. I saw them this year at the New York Hardcore Superbowl and his voice is amazing. One of the greatest hardcore bands that is still playing. They did a European tour a while ago but with a different singer. I think a lot of people would come out to see this.

There always has been pretty massive hardcore scene in The Netherlands. What’s happening with it now? What are some of the bands kids should check out?

I think it’s getting better. There was a period when there was not a lot going on in the scene. Nowadays the bigger bands still draw a crowd and there’s a lot of new bands coming up. So hopefully there will be a next big hardcore wave like we had in the 80’s and 90’s.Metalcore is getting bigger and bigger but a lot of these kids have no idea where it came from. Also the bands are drifting away from the hardcore sound. Dutch bands to look out for are All For Nothing, New Morality, Strike First and us of course.

What do you think is it about hardcore that make it a lifestyle to kids all around the globe?

It appeals to kids because of the rebellious nature of hardcore. Ideal when you’re young and you want to listen to something different then that top 40 bullshit. Hopefully you pick up some different views about life in the meantime. That you can apply in your personal life later on.

Plans, gigs and releases planned for the rest of 2009 and beyond?

We got some shows planned and writing new material. So hopefully we’ll hit the studio next year.

Wrapping up this interview please tell the kids why they should go out and cop your debut EP?

Check it out if your into no nonsense hardcore like it used to be made. Order it online at www.allhiphopshop.com and check out some tunes at www.showofforcehardcore.com.