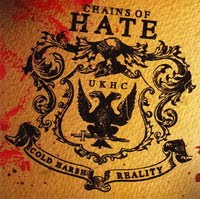 Chains of Hate were formed from the ashes of Twist The Knife (Cardiff Hardcore, Wales). More inspired than before, Speed and Jammo stayed as they were (guitar and bass), Tommy stepped up to vocal duties and good friend Jordan (Elsid) completed the lineup as the new drummer.

As summer '09 approached, Chains Of Hate joined the notorious Rucktion Records family. Their debut album is due as is a stint around Europe with their brothers in True Valiance. No one can stop'em now. Let the games begin....