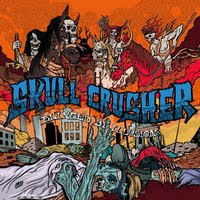 Reflections Records has announced the signing of Skull Crusher (New York). The label will be releasing their debut 12”/MCD, Blinded by Illusion, in February of 2010. You can check two tracks from the upcoming album here.

A handful of bands throughout the last few decades of 'hard' music have been able to capture that elusive gray area of creative overlap where hardcore, metal, and rock morph into one crushing wall of sound where everything to the listener is somewhat familiar and yet still completely fresh. The list is pretty short, and most people fond of the underground would be able to rattle off at least a few of these heavy hitters. The underlying structures and ideas to this formula aren't anything mind boggling...it's rock-based music after all. But sometimes even the most simple sounds, when played right and through the right gear, can be devastating.

Skull Crusher is an attempt by obsessed fans of hard music to blend their favorite elements of the above. If you took a mixtape (cassette of course) of the Cro-Mags, early Metallica, Danzig, The Icemen, Underdog, Raw Deal, Judge, and Rollins Band, and had to try to form one sound out of them, Skull Crusher wouldn't be too far off.