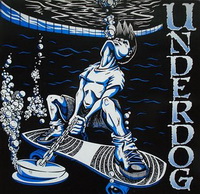 Things over at the Bridge Nine Records have been busy this winter and we are proud and excited to announce the release of NYHC legends Underdog discography titled "Matchless." Set to hit stores on May 18th, 2010, this comprehensive release will include both "The Vanishing Point" and the Demos on CD/double LP. Bassist Russ Iglay said, "This release has been a long time coming. We're glad that it's going to see the light of day this Spring on Bridge Nine and we can't wait to get out there and play more shows this year!" Buzz has been re-building around the band since their performance at last year's Burning Fight show in Chicago - expect to see Underdog on the road this summer in support of this release.

Underdog has been a staple in the hardcore scene since their inception in the 1980's and the release of "Matchless" will further cement the impact that the band had upon the world. The two key, constant elements of Underdog during its span of four years were Richie Birkenhead (vocals) and Russ "Wheeler" Iglay (bass) who decided to form a band while talking at CBGB in 1985. The band, named True Blue for about a week, soon became Underdog. These two NYHC matinee regulars and longtime skateboarders, Richie and Russ, were indeed at opposite ends of the spectrum in temperament and circles they ran in. Case in point: Richie did time with Youth of Today and Russ with Murphy's Law. Underdog was also one of the first punk bands with deep roots in skateboarding, and skating still remains a focal point in the life of the band. Richie, while fronting Underdog, raised the bar in NYHC during those years, in a scene filled with aggro, straight-up hardcore bands that concentrated more on athletic, than vocal prowess and melody on stage. He prowled the stage, commandeered the crowd and could switch from a guttural scream to the voice of a choir boy in a split second. Russ, well known for his Andy Capp, drink up, devil may care, knuckle-up persona equaled Richie in the stage presence department, swinging off ceiling pipes and taunting the crowd all while keeping the rhythm section tightly pumping with kid brother Dean Joseph (Iglay, stolen from Jersey Shore pranksters Good Humor), who replaced original drummer Gregg very early on and remained a permanent member. Underdog became a hugely popular musical hybrid capable of playing shows with any other band while winning new followers along the way. Their "fuck with our friends and you fuck with us" attitude wasn't just a bullshit theme for a song, like lots of other bands. These guys practiced what they preached. The band's attitude on stage encouraged everyone in the crowd to let loose and go nuts without fear of getting sucker punched or bullied by anyone. And they did. Underdog shows were sweat-drenched, hard dancing, sing-along events for everyone involved.

Their first 7" EP released on New Beginnings Records (with Gregg Pierce on drums and Danny Darella on guitar) instantly became a hot commodity in the NYHC scene, spread through the U.S. and was quickly out of print. The legendary Matt Solomon cover art became the unofficial trademark for the band on T-shirts, flyers and tattoos. On the power of that 7 alone, While Richie, Russ and Dean remained fixtures (except for Richies brief departure to play for Youth of Today on one album/tour)(vocal duties were briefly taken over by Carl DiMola), guitar players were to Underdog what drummers were to Spinal Tap. Original guitarist Danny was later replaced by Arthur (Token Entry, Gorilla Biscuits), who was subsequently replaced by skater dude Chuck. For the recording of the Over the Edge demo, and also at the tail-end of their existence, Underdog played as a trio, with Richie on guitar. Already quite aware of Underdog and after hearing their 1988 Over the Edge demo, Caroline Records signed the band to record what became the album "The Vanishing Point." The band had matured into an extremely tight musical unit, mixing the best of power, melody and even reggae into a volatile mix second only to Bad Brains. Chuck Treece joined the band on guitar to help record the songs already written by Richie and Russ. Recorded in one week at Electric Reels in upstate NY and produced by Don Fury, "The Vanishing Point" was one of the most anxiously awaited records of the year. A 1989 nationwide tour to support the record was their biggest and most successful at that point and there seemed to be nothing standing in their way. Sadly prophetic, the title of the record rang true at the conclusion of that tour. Arriving back in NYC and dropping off Richie, Russ and Dean drove home for an agreed upon short break. That short break became a long break and they decided to cancel their European tour.

Now Underdog is back with the original core line-up, and with longtime friend and American Standard axe-man Matt Dolan as a ful-time member of the band. Look for the Underdog discography, "Matchless," to hit stores on May 18 2010 from Bridge Nine Records.