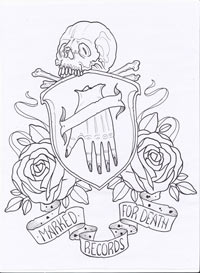 Market For Death is a new label from Germany. It was founded just at the beginning of 2010 and since then started working with bands like Cunthunt777, Bravestar, Nothing To Regret and Still Alive. The future for them looks promising so be sure to check out their upcoming releases. Here's their website.

Marked for death was founded in early 2010. The label owner of Marked for death has the motivation to give the scene something back after being so long part of it. In Europe we don..t have many labels that support hardcore bands. So this label would give the opportunity to release their stuff on that imprint. This isn't a company, this is more like a family!

The south area of Germany has some really great bands like the most discussed and controversal Cunthunt777, the heavyweights Bravestar and the youngsters of Nothing to regret. Also watch out for the US band Still alive! These heavy hitters from the US will hit Europe as a split partner of nothing to regret in May. In the future there will be more bands on the label from all over the world!