Starkweather update on the upcoming releases 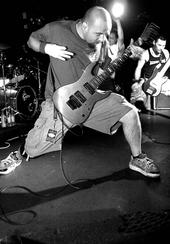 Starkweather have shed some light on band's upcoming releases. Here's what they said:


"Deathwish releases are in the pipeline. Looks as if This Sheltering Night will see light of day late April. The Overmars split? Well, that one will be taking a similar approach to its release as Blacklisted - No One Deserves To Be Here More Than Me.

"The splits that are in progress with Little Girl Terrorist and Thousandswilldie will, hopefully, be mixed early April. These things take time and money.

"And, finally, right? Rennie has completed vocal work on tracks by Pulling Teeth ('Generals of Darkened Hymns' which will be on a split with Irons coming out on Deathwish), Pristina ('The Drought' - which in addition to their vocalist, Brendan, there are appearances by Bloodlet, Hope and Suicide, Junior Bruce vocalist Scott Angelacos, Steve Austin of Today is the Day and Charles Manson), and Elodea. Other things are in the works for Concealment and a very interesting multi-vocalist project from Caina which is best described by Andy himself at this blog post.
The band is also playing three shows this March:
3/26 Philadelphia, PA @ the Ox
3/27 Albany, NY @ Bogie's
3/28 Brooklyn, NY @ Public Assembly