To Kill signed to Let It Burns Records 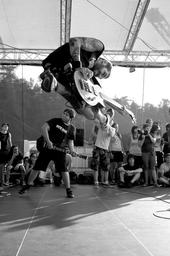 Here's official statement from Let It Burn regarding To Kill joining their ranks:


Alright, fasten your seatbelts: In order to unite all preeminent European hardcore bands in one big family, we made celebrate another big achievement: TO KILL are from now on part of the Let it Burn Records roster! We heartly welcome our Italian friends and look forward to releasing their arresting new album "Antarctica" any time soon.

There's a lot of bands who claim to be "hard working" and "dedicated" but most of their strength lies in getting drunk at band practices, playing local shows and recording a demo every two years. The bequest TO KILL has already created since their formation in 2004 is intangible. Besides the release of three albums and two EPs, they are one of the most active touring bands in hardcore: over 10 (!) extensive European and US tours with bands such as BANE, HAVE HEART, LIFERUINER, PARKWAY DRIVE, BURY YOUR DEAD, VERSE, SET YOUR GOALS, RAISED FIST, GATHER and so on is an amount that European band can trump. TO KILL literally live "on the road".

TO KILL about their signing with Let it Burn Records: "We have some good news from the ToKill camp: After we parted ways with our old label, we've been talking and discussing on what would be the best for us as a band and considering their amazing work ethic, their deep hardcore rooted attitude and the happiness they showed in the possibility of working with us, we feel like we found a new home in one of the longest running hardcore labels in Europe, the german based Let It Burn records. We've known these guys for a long time and we know we can totally trust them in the release of our new record 'Antarctica'."

We already got a chance to listen to 'Antarctica' and were quite impressed by the new level of heaviness TO KILL have reached. A well balanced and effective mergence of metal (20%) and (modern) hardcore (80%) that sounds more '2010' than anything else from that genre-mix I heard in a long time. Check out our audio player or mp3-download section for a first impression.
www.letitburn.de/jukebox/

Album artwork and release date are going to be announced any time soon. In the meantime catch the band on their tour with Shai Hulud.