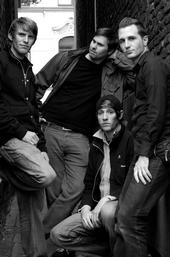 Here's a good example that all it takes is good will and you can make a change. The German hardcore band Black Friday 29 is setting an example for all of us collecting the money on all of their shows for the last couple of years to donate it to their godchild. Now, they're planning to start a foundation of their own called "Concrete Help". Here's what Björn from BF 29 got to say about it:
It has been almost two years since Black Friday 29 has decided to turn words into action. In our personal lives we always try to be the best persons we can, but we also wanted to put the bands message into something positive, into something others can benefit from. To support a little child as a our godchild was our goal, but it seemed never enough for me. It was a good beginning though.
We have always kept on talking about doing more, perhaps founding an incorporated, non-profit association.
As some of you might know, we had been carrying a piggy bank to most of our shows and collected money to donate this to our godchild. It has been very succesful in the last few months, considering the foundation we donate the money to (www.plan.de) doesn't want us to send more than 2 shippings per year. After we have send two shippings over to our godchild in Nicaragua, we still had money left over. Consequently your donated money went to the foundation PLAN to help the people in Haiti.
I have always believed in possible positive changes the HC scene can bring or at least take part in. Seeing that the donations went so well was proof enough for me.
So I have spoken to my bandmates and some other friends connected to the HC Scene and took the bigger step to found an incorporated, non-profit association. We still need to do the paperworks for the institutions, but this will be done within the next 3 or 4 weeks.
So don't be surprised to find a different piggy bank box on the merch table of Black Friday 29. It will from now on all be donated to "Concrete Help", the Hardcare way! Our godchild will still be supported as before!
Support this cause and don't be greedy when Black Friday 29 is playing your town!