Straight To Your Face signed to Demons Run Amok 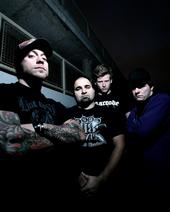 The restless folks at Demons Run Amok have just inked a deal with another powerful hardcore posse. This time it's Straight To Your Face, a band which most of you are probably familiar with, and if not, you should give 'em a try by clicking here. They're working on a new album which will be called "The Struggle"

Here's what the band posted in their myspace bulletin:


We are very proud to annonce that we have just inked a new record deal, with the gearman label, Demons run amok.
Its an honor for Straight to your face to be a part of the DRM famiglia, and we are all, very much looking forward, to the new partnership.
We will hit the dead rat studio in Aahus, next monday, the 15 of marts and will stay there, in Jacob Bredahls loving and tender arms, for to weeks, till the record is done. So that Jacob can mix and master the new STYF album after we are gone.
The title for the new album is...The Struggle...and its says all about what we vent through, to get this brutal and sick new album out, and still standing as a band, stronger than ever.
BUT we are back, last man standing, no turning back...Hell Yeah!!!
Look the fuck out, for this new album coming out on Demons run amok!!!