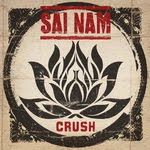 Head over to the Sai Nam facebook page to hear the new track "Live Fast" from the forth coming album "Crush". Some info about the band: Looking to start a new project in early 2011, New York Hardcore Stalwart guitarist, Mike Dijan (Breakdown, Crown Of Thornz, Skarhead) called on sonic co-conspriator drummer, Lou Medina (Breakdown, All Out War,District 9). The two long time friends and bandmates went right to work, hammering out a batch of blistering heavy material.. Dijan then reached out to acclaimed producer, Dean Baltulonis (Sick Of It All, Hope Conspiracy, Supertouch) about a vocalist for this unit. Dean strongly suggested (Trapped Under Ice) frontman Justice Tripp, with whom he had worked with on TUI’s breakthrough LP Secrets Of The World. As destiny would have it, TUI were headlining NYC’s Santos Party House that very week, where Dijan and Tripp talked about jamming together.

The fit seemed perfect and Tripp was fully up to the challenge. So without a single show or rehearsal, the band joined up with Baltulonis at Wild Arctic Recording Studio in NYC to record their debut 10 song LP, CRUSH. Right from the start, Sai Nam was firing on all cylinders. From Dijan’s heavy Rock-esque riffage to Tripp’s rapid fire vocal delivery, to Medina’s thunderous/chaotic drumming, to Baltulonis’ colorful production, and bass work, Crush promises to deliver the goods in stylish fashion. Hardcore icon, John Joseph (Cro-Mags) appears as guest vocalist on the album to ice the cake.

With their debut full-length in tow, Sai Nam is ready to hit the road and play shows across the globe, bridging the gap between two generations of hardcore music.