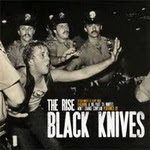 I know how much uncool is to be into the ‘ex-members of’ type of bands just because the members were in some other dope but now defunct band, but I gotta admit that the thing that got me interested in Black Knives in first place is that it features guys from 8Control. I wasn’t even aware that 8Control is no more, I really liked the metallic hardcore the band used to deliver. Shit happens, I just hide my tears, try to stand strong and put that new 4-song mini-album, The Rise, into my stereo.

After short intro, the music kicks in and it’s all good again. The band is different than 8Control, but the quality is the same. This time they pump out some powerful tunes that shamelessly take some elements from Terror, Hatebreed or Until The End. It’s got that heavy metallic sound but the song structures and general feel is still hardcore. There’s some creative riffing in here and the structures are far from generic, but all the songs are focused and get the job done. I know the band is working on new album slated for 2013, so hopefully they can keep the same level of intensity throughout the full length album.