Face Your Enemy - Do The Right Thing 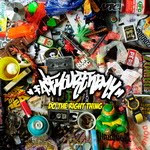 Face Your Enemy is back to drop bombs on your ass. The band has cooked up ten new tracks which are no doubt their best work to date. I still dig their previous albums, but this shit over here is definitely step in good direction. They moved away from the typical beatdown sounds of their previous outputs and focused on more vibrant sound. The music still goes hard and heavy, but they keep it diversified with a lot of different influences running from traditional hardcore to straight up metal.

The whole concept of the album deals with the good old days and different cool things from the past like Ninja Turtles, Welcome To Venice tapes or classic Italian zombie flicks. Far from fairytales about killing your enemies or being street-level kingpins like some other European bands that just try too much. It’s all about taking a trip down the memory lane to the days of old. Well, it’s hardcore so obviously there needs to be some level of aggression, but they keep it at reasonable amounts. A mix of negative and positive, just like life in Southern Italy.

The stories are powered by haunting riffs and booming drums. The band proves they got skills and are capable of making a good album. First couple of songs go like crazy, with that rude attitude that is pure amusement. I like that approach, not every band can serve such laid back, I-don’t-give-a-fuck attitude while still sounding heavy. The band thankfully manages that. Tracks like Hardcore Life, Rocky Marciano or Teschio Truck are key examples how dynamic and entertaining this album can get. The album might benefit from some more catchy hooks in the second part, when the things get a little bit static, but they are still far from being boring.

In the end, Do The Right Thing is a win if you’re into heavy-ass hardcore that combines aggressive delivery with slick tunes and lyrics. It’s different than any other new beatdown album, which seems almost impossible when you think how this genre has been exploited in recent years.