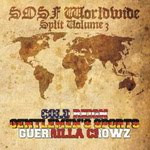 SOSF bands never let down when it comes to that ignorant and reckless hardcore this scene needs so much. The general idea behind this album is getting 3 SOSF bands on one CD, each band representing different country where SOSF cartel has established its base: US, Germany and Japan. The first band is Cold Reign out of Indiana with short intro and 3 hard as nails hardcore tracks that all are bangers. The Noose is the catchiest tune on the album, driven by tight groove and double bass action, topped with hard as nails vocal. The band has that heavy sound Midwest is known for, bringing the best elements of 90’ and 00’ tough guy hardcore. No bullshit, just some straight up dynamic and intense tracks.

Gentlemen’s Sports holds up just as well, sticking to heavy, metallic hardcore which goes from reckless fast parts to vicious breakdowns. This one leans more into metal side of the game, but the band keeps it more vibrant and dynamic that you would expect from a typical beatdown sound nowadays. The vocals have kind of smart-ass attitude to them that makes me think of TRC, and there are even solos now and there. All four tracks which they contribute here are pretty solid, although I think the band needs to add some more dynamics to their music before they start working on a full length.

The next in line is Guerilla Crowz. I have no clue why they have chosen such name, but the music itself is not that bad as you would think. It’s still beatdown and although it lacks finesse of bands like Cold Reign or CDC, the four tracks they contributed here are still solid if you’re fan of the genre. Don’t expect anything over the top though.

Cold Reign steals this album, but the other bands also contribute some solid songs. Fans of tough guy hardcore and basically everyone who seriously hates the world and society needs to pick it up! No fancy guitar licks, clean singing, heartbreaking melodies or whatever instagram-obsessed art college kids listen to nowadays, just hardcore sound that’s raw and ugly as it should be.

Review by Dloogi
Filled With Hate, 2012