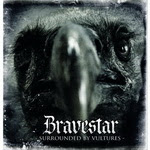 Just like on the previous albums, on Surrounded By Vultures Bravestar plays quite straight forward hardcore full of sing-along parts and breakdowns. It’s still aggressive, in-your-face hardcore and the band still relies heavily on thrash-inspired riffs, bumped up tempos, thick bass and intensive drum work but has also tried couple of new tricks to prevent things from getting boring. This basically means the songs got more complex with more variance in tempos and some metallic elements or even hard rock parts thrown in.

It’s not always the best thing to do for a hardcore band, and some of the experimentation get the job done and some do not. Hardcore tracks shouldn’t be longer than 4 minutes, that’s the rule, and the band is at its best when they focus on fast paced riffs and shredding riffs. I definitely don’t like the chorus for The Declaration, which basically makes it one of the weakest tracks on the album. Luckily, it’s followed by Standing Strong, which is as sharp and hard-hitting as I would expect from this band. The title track goes hard as well and that’s the type of shit I wanna hear more! Lyrically, things are more serious than on band’s more party-oriented previous albums, as the songs deal with subjects such as fakes, broken trust, friends passing, and standing up for yourself.

If you're a fan of the heavier hardcore acts like Death Before Dishonor, Terror or Agnostic Front, and generally are looking for heavy metallic hardcore, you should check it out cause you might enjoy what Bravestar are doing. I still prefer band’s debut album, but this one is also solid.