Review: Got Nuthin´- Back On The Streets 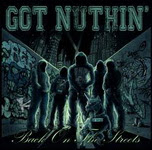 This 4-song MCD is apparently a debut release from this Berlin-based band with members from Tonedown, All For Revenge and Denny Crane. The idea behind Got Nothin’ is that these dudes wanted to make some more traditional hardcore music than what they do with their other bands. So they got together to write couple fast songs, tested them live and when the crowds’ reaction turned out to be positive, the natural thing was to follow up with a proper release. That’s how this ep came to being. The band plays old school hardcore that’s heavily indebted to the NYHC sound, but it also got ‘European hardcore’ written all over it.

If you like bands like Rykers, Only Attitude Counts or Backfire then you’re at home. The songs are rather fast with occasional groove-based breakdowns and gang vocals. Songs with titles like “Back On The Streets” and “Self Respect” might sound cliché, but I am mentioning this just to warn some more sensitive readers as I am the last to complain about such stuff. The whole concept is about hardcore pride, family, being bad ass and that something I always support! District has released this EP on vinyl format with three different cover artworks so vinyl freaks should feel excited!