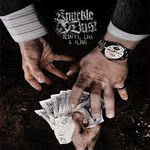 Knuckldedust has been steadily building a reputation as one of the most ferocious bands in Europe. The combination of credibility, obvious talent, and down to earth attitude which this bands represents allows hardcore kids to immediately connect with the music and the message. I am totally into their previous albums, but this new stuff is one of the best shit they ever recorded. With Bluffs, Lies & Alibis, Knuckledust has perfected the formula that has made the band one of my favorite hardcore acts for the past few years.

It sounds accomplished and well-rounded, and is probably one of their more accessible albums. There's still plenty of harsh and mean hardcore joints on the album that bring nothing but ruckus, but there’s also more melody with tracks like the title one, Bluffs, Lies, Alibis, which make things more dynamic and interesting. All songs are executed to perfection with crisp musicianship and dynamic songwriting that works around band’s key assets – Pelbu’s menacing vocals and massive chugging guitars. There is a lot of tension and excitement in the way the songs are delivered that immediately draws the listener in. Songs like Inner City Life, London ZOO and Ride The Storm are definite bangers, but generally there’s no weak moment on this album.

What I think makes this type of straight up reckless but still smart hardcore that Knuckledust does so unique is how it combines the hardships of everyday life with bigger problems. It's street smart and down to earth, but at the same it drops some heavy knowledge about what is going on and makes you think about things in larger perspective. It is music for regular guys who are trying hard to make ends meet and have pride in their struggle. If you’re underpaid, unemployed or struggling in any other way, this one is for you!