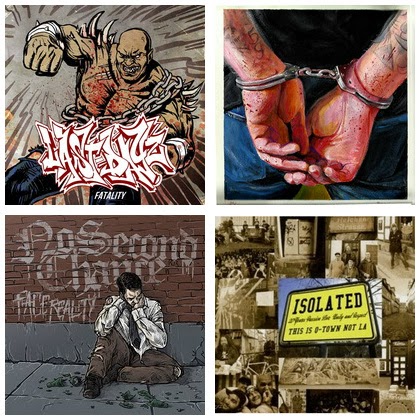 Last Dayz - Fatality (Ratel) - One of the Poland’s finest hardcore bands comes back with yet another dope ep. After the split ep with Cornered which was already great, these new tunes shows a lot of progression. The basic formula on Fatality remains the same - the tracks are as arrogant and grisly as you would expect but everything just sounds better and harder. The band seems even more focused and forceful than on the previous eps. The lyrics span from personal to general topics like life and hardcore scene, everyone can relate to it. I saw these dudes live on couple occasions and every time it was a crazy experience with people throwing random stuff around and beating crap out of each other. Shit is real! Fatality is one of the slickest hardcore releases this year, no doubt.

Life After Death - Cuffed And Cursed (DIY) - It seems like every few years I come across a beatdown album that avoids the impulse to sound remotely modern. Instead of double bass and constant breakdowns, Life After Death comes through with that classic Bulldoze/Merauder/Hatebreed shit. I can't imagine any fan of these bands not liking this album. All the tracks on here are really dope. You get a handful of songs with that classic 90’ east coast metallic hardcore feel as well as a few that stray a bit outside of this lane. The topics of the songs are all about the stresses and bullshit of everyday life, kind of standard shit but always relevant. It’s probably the first time I paid for mp3 files but this ep is so good and the money goes to one of their folks who got himself in trouble with the law. So, help the brother out and get yourself some good hardcore music by buying it here. I wish it would be out on cd or vinyl one day.

No Second Chance - Face Reality (Rucktion) - No Second Chance is a London-based act that delivers some mosh-worthy hardcore tunes that blend chugging riffs with tons of breakdowns and vicious vocals. Generally the music carries the style of bands like Throwdown or One Nation Under, but my only problem is that it all sounds just like your average album of this style. It’s not entirely terrible, but nothing to write home about. It doesn’t help that I was never that much of a fan of this particular sound, and I can’t fight impression that it just lacks purpose and is just playing hardcore for the sake of playing music. There’s nothing pissed off, negative, or hateful about it. On the other hand, it might be due to very polished sound on this one, some more dirt would definitely give it some more force. This record is over and I can't remember this shit even playing in my speakers, that's how much of an impression it leaves.

Isolated - This is Q-Town not LA (District Records) - As much as I love eurocore bands like Only Attitude Counts, Ryker’s or Backfire, I just can’t get into this stuff. It’s mediocre and uninspired hardcore with punk and metal leanings which totally lacks the aggression hardcore should have. I would expect something more from a band which have been about 20 years in existence. Damn, sometimes I think it’s even worse than any Crushing Caspars album, but then I remember how terrible CC albums are. I'm only feelin' one or two songs on here, with most ranging from just ok to plain terrible. I'll probably never listen to this stuff again. Next.