The new album is called Hate Mantras, can you tell me the story and idea behind the name?
Daan wrote a Rhythm to the Madness EP called Hate Mantras. That band quit so he had those songs ready. We didnt use any of the songs but the name stuck. A hardcore song is a Hate Mantra per definition. It fits the lyrics as they deal with a lot of hate.

Personally, I think the album rips. As this is your creation, how is the album sitting with you when you listen to it now?
I am really into it. Its the first record that came out quite quickly so whereas before it would take ages for the record to come out and I'd be fed up with the songs before we even recorded them or put them out. I love each song for what it is because we've all contributed to this record instead of having one of us writing all the riffs. The guitars and the drums sound tight and I like the way my vocals ended up on most songs.

How is the record doing in terms of feedback from the listeners? Was it well received? Are you even concerned about this stuff?
Its always nice to hear kids are into it, everything we've gotten back so far has been very positive so thats cool. Even before the actual record was out. Reviews have been overwhelming and many of my friends were into it and even my family liked the way it sounded for the first time that meant a lot to me. 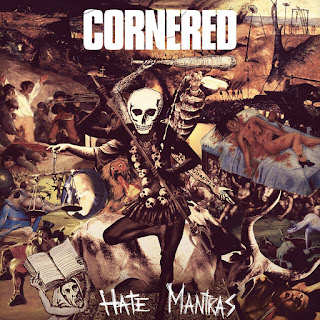 The lyrics are straightforward and aggressive as alway. In hardcore generally you either want to get a message across to the listener or get some personal demons off your chest. So, what did you want listeners to be able to pull from this album in particular?
To me its not so much trying to get something in particular out there. Hardcore to me has always been something where I feel its to each its own what you get out of it. But mostly its been personal demons for me. I like the way I put things to words this time and I guess most lyrics are self-explanatory. I dont consider myself a poet or beat around the bush lyric wise.

What was the story with the amount of split 7”s you did? How did you hook up with these bands - Last Dayz, War Charge and Cold Snap?
Cold Snap was a hook up through Niclas from No Decline bookings. They started a label and we were their first gem, they really helped us out a lot when we started out. Booked us a sweet tour and spread the word about us in Germany. Worship records was only the beginning. We have a split coming up with Holland heavyweights BACKFIRE! I am really excited for that.

Tell us about Live By The Sword, people might be surprised to hear that band but Pillaged hinterland is actually very solid. Who from Cornered plays there and how it even came about?
Our guitarplayer Rudie is an old skinhead actually, nowadays it's all about surfing but back in the days it was boots and braces all over. He was asked to join the band by his old comrad Daf, the fire was lit again. He used to come to our rehearsals with the most awesome oi riffs which we couldnt really use for Cornered. So it was cool to hear his stuff is being used for LBTS.

There’s not much info on the internets about the history of the band. Take me back to the beginning of Cornered, what was the main motivation to get it started?
Yo back then most bands were doing a weak punkrock or soft kind of hardcore. I hated it. We were all still in bands wanting to play hardcore but most of them broke up. We knew eachother from shows and decided to start a new band called Cornered after Straight A's and Remain quit. Jonne from New Morality joined us on bass and we had a solid line up.

I hear some Breakdown influences on the new album, musically and lyrically. Did they have any special impact on you?
Of course, we are all huge fans of Breakdown and we're not ashamed to admit we definately see them as a big influence on our music and lyrics.

Could you tell me about what or who got you interested in hardcore and punk?
Onno Cro-Mag paved the way for european hardcore as it is today.

Are there any newer bands that are inspiring or impressing you right now?
There's good bands around everywhere. For instance Escape and Mindwar are great upcoming bands from Belgium. 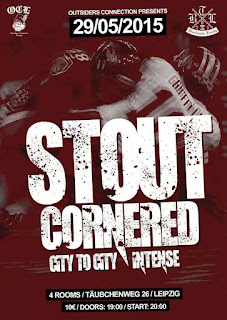 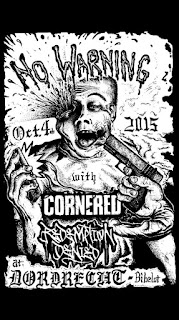 Tell us something about playing in places like USA or eastern Europe? What was the wildest thing that happened on tour?
Jonno Balster. The guy's a madman. Not a boring day will pass with him on your team. He will wake up from one of his own farts, start grunting and depending on his hangover he will make sure everyone is woken up by a goldhonest harley-esque Oh Yeah. After that he will start getting restless telling everyone to start packing and eat most of the food at our breakfast buffet. As soon as we get in the van he will fall asleep just to wake up every now and then in the worst mood. Until an hour before the show he will be playing with his phone or watching netflix on his iPad and start drinking. There are two scenario's but the one involving whiskey will make him play like a revolutionary bass player. Les Claypool has nothing on him and he will reach his peak within a half an hour after the set. He will have his way with a woman or two and make us proud, and then go to sleep while the rest of us go to a bar.

What does Cornered has coming up?
Hangovers, lots of em.