I bet some of you still remember Belgian hardcore band Personal Vendetta. For My Enemies consist of guys who were involved with PV and after that band broke up didn’t give up playing hardcore. FME released their first demo in 2008 and debut full length should be out soon. This interview was made via e-mail and band’s spokesman is Youri.

Let’s start with boring stuff. How and when did the band come about? What are your influences?

The band started out in 2006 with 3 ex-members of Personal Vendetta (Mike, Jurgen and Das) That line up didn’t last very long so Dennis joined the team and Joey jumped in as second guitar player. Mici and I joined the band somewhere half 2007.
As cliché as it sounds but FME is heavily influenced by what we see around us, what we feel, see, hear, experience,… . What goes on in our lives reflects in our music.

What other bands except Personal Vendetta did you guys play in?

Mici was in a band called Turn Away and Joey used to play guitar for Hecate. Both bands are no longer active. I was in Ashema till September 2007.

I’ve heard you had some line-up problems recently. Did you guys find a new singer yet? What was the reason for the change?

Yes there was a problem recently. Since I’m answering the questions you can tell there is no new singer. Reason why there were doubts concerning my place in the band was ‘cause of a few shows that had to be cancelled in short time notice. At first I had some difficulties with my throat and recently I had some legal issues. Through this way I’d like to apologise to all concert bookers for these cancellations.

Does the band have a message, or is just about getting out there and playing? Where do you get your ideas and inspiration for the lyrics?

Of course there is a message. We’re a fucking hardcore band! We’re not about to talk about bullshit but about real life situations. We’re not from the streets or from the ghetto so don’t expect lyrics dealing about guns and other crap like that. We all know where we come from and don’t pretend to not be. That doesn’t mean all is about love, sunshine and peace. 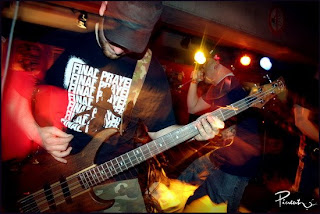 Is there any goals you set with the band or in general before you stop?

Nope there is no goal with this band. We came from nothing and we’re going nowhere! We just try to vent all our frustrations we have to deal with every day over and over again.

Are there any plans to record a full length record?

We are now working on new stuff to be released on a full length due after the summer of 2008. We’ll see where that takes us.

Are there any tours planned for the future?

So far there are no tours planned. Like I said before, we’ll see how the LP goes.

I know many people wonder about this one - why did Personal Vendetta brake up?

We started out Personal Vendetta with 6 members and at the end of the ride there were only 3 left, Cas, Roman and I. We just wanted to do something new. With Kenny and Jochen in the band it was easy to make that step and we decided to kill Personal Vendetta and start over with a new name, new songs,… . Let’s just say it was time for something new.

FME is a young band, but you’re not newcomers to the scene. What does hardcore mean to you? What kept you going through all the years in hardcore?

We sure ain’t newcomers, true that! Hardcore for me is a mindset. The way you handle things in life. It’s much more than just music. For me somebody who drags his ass out of bed every morning for work to bring food to the table is more hardcore than 90% of all the shit talkers on the internet claiming to be “real” cos they downloaded some outta 1983 band’s songs.
Hardcore helped me through all the years.

How do you see the current hardcore scene? With so many metal core/emo/screamo bands around, do you think old school hardcore has been lost?

The current hardcore scene has never been so big! There’s shows all over the country/Europe. I don’t want to think hardcore is restricted to one style of music, as I stated before, for me it’s a feeling and not a type of music. Old school hardcore as you name it is just a name. Madball for instance is considered an old school band, but when they started they weren’t old school. In ten years maybe people will say that Terror is old school too. 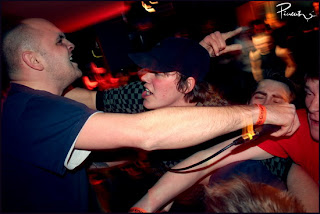 Best thing is the friends you make all over the world. Lot’s of kids can sleep in multiple cities world wide cos they are involved in the hardcore scene.
Worst would be the kids that take everything for granted. People who don’t respect the roots and foundation of hardcore.

Belgium used to have a really strong scene way back. What’s happening with people who were involved in hardcore then? When you're playing shows around, do you find its a new generation of faces, or do the same old faces always pop up?

It’s still strong! I remember times when there were no shows and hardly any bands around. It goes up and down. New people keep coming in and they go away when they find something new they can jock.

Do you think the likes of the Internet has helped hardcore and punk?

If it wasn’t for internet, we probably wouldn’t be having this interview cos you would’ve never heard about For My Enemies. See that’s a good thing. People all around the world are just a mouse click away from our music and info on the band. Bad thing about it is the difference between today and 10-15 years ago when a guy like me was anxious for weeks cos I was expecting the new Madball cd in the mail. Or when we would trade mixing tapes with other people, you got to know at a show across the country, to discover new bands.
I’m not saying that it was better 10 years ago, just different. Hell, you live in Poland where not even 20 years ago there was still a communist regime. Maybe not the same but everything has it’s pros and cons. 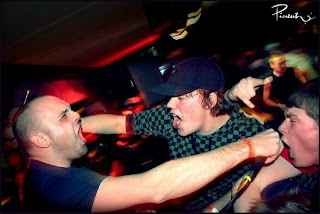 Do you guys know anything about Polish hardcore scene?

I’m gonna be honest with you, I don’t know any Polish band. What I do know is that my boy Sean who’s in Spider Crew told me you guys have insane shows out there with great crowd response! I’ll check it out!

Whats your earliest hardcore memory! What music did you grow up on?

Wow, that must have been Biohazard somewhere around 1990-1991. I grew up on old punk and metal music. Me and my brother would listen to Dead Kennedy’s, Sex Pistols, The Ramones,… and because it was the 80’s we got in touch with early Metallica!

Thanx a lot for giving us the opportunity to introduce us to the Polish hardcore scene! To all you kids out there. Follow your heart, never fucking give in to nothing/nobody.
Thanx for the interview!