Skare Tactic - The Rage Within 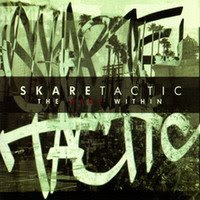 Skare Tactic represent LA hardcore scene. It’s a west coast that is home to bands like Donnybrook, Terror, First Blood or Blood Stands Still and it’s maybe wrong to start a review with a comparison, but music on The Rage Within cd is not unlike the stuff you know from above mentioned. Just to set it straight, it’s not like they’re rip off or something, it’s just the same amount of energy and anger and adrenaline that will get your fist clenched, legs kicking around like crazy and make your ass move!

It’s not the first time I’ve heard this guys. I remember their debut CD on Thorp records, called Remember When, was a fine piece of hardcore played with a total respect to the old school spirit. Band also released pretty good split cd with Commin Correct and other one with All Else Failed. With The Rage Within they decided to take promotion in their own hands and this CD came out by Ghost Town and Our Blood records, with first of these being run by their bassist. Musically, it’s no doubt their best offering so far. From the beginning of the first song you can hear they know how to handle their shit. They stay true to their old school sound but throw in some really good ideas and back it up with some solid musicianship. Every hardcore kid should find here something for themselves – crazy fast parts, pissed off vocals, good, personal and angry lyrics and really punishing breakdowns. This is the way hardcore should sound in 21st century. I know there are a lot of bands doing style like this but Skare Tactic is doing their stuff pretty well and if you’re still down for some rage and anger in hardcore, give it a try.