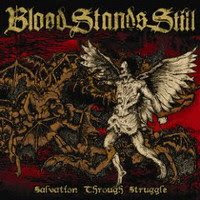 Blood Stands Still is one of the bands I had to see playing live to start to really appreciate. Their set in Warsaw was one of the most intense and energy filled live shows I’ve seen last year and after that, I knew I gotta check this new record out. Musically, they’re still staying true to the sound they developed on their previous releases, but if you ask me, it’s with no doubt their best record so far.

Basically, everything here has been taken to the higher level – tracks are more aggressive, production is heavier and more powerful and song writing is tight and fluid as never. They still like to throw in some metal influences but the old school vibe is still present. It sounds mature and modern, but without sacrificing intensity and vitality, things we’re all here for. This is first rate hardcore with some wicked riffs and intense drumming. Bands like Terror or Since The Flood pop through my head while listening to this, but even if there are many similarities, Blood Stands Still have their own unique style and are easily recognizable. Make no mistake, they have delivered one of the strongest missives from the American hardcore scene in 2008. Blood Stands Still will leave you bleeding, kid!