Enemy Ground - In Memory Of Them All 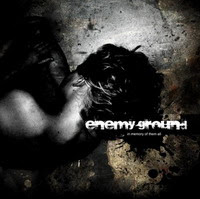 Enemy Ground - In Memory Of Them All
Gangstyle, 2007

Enemy Ground’s second full length brings nothing new to their sound. They still walk the path paved by bands like Merauder or Born From Pain. Especially the second one comes to my mind when I listen to some of the tracks on this CD –same heaviness, mid tempos, mosh parts. Even the vocals sound much alike. I know some people might not like it, I don’t care.

I guess signing to GSR really works for them. Enemy Ground not only made a big progress when it comes to handling their instruments and writing good music, but the production of this record and cover artwork is top notch. Their sound is very clean, you can hear each instrument clearly and distinctly. Most of all, they finally sound as heavy as they should. It comes as no surprise when you consider the production duties were handled by Jacob Bredahl (he’s also doing guest appearance in one of the songs). My only gripe with the album is that sometimes it lacks energy and intensity, at least not in the amount you would expect from a hardcore release. You know, this thing in music that makes your flesh creep and you just wanna get lost in the art of mosh, mayhem and destruction. Enemy Ground tries, but never really delivers enough emotions to make you feel like this. This album is filled with groovy riffs and intense drumming but after few spins all the song begin to sound the same. Most of the tracks are treading the familiar ground and they really should work on making their songs more diversified. When it comes to vocals, you get typical hardcore edgy and harsh with occasional growling now and then. Nothing I’ve never heard before, but still works for me. This album is just a solid release, but nothing above average. They know how to deliver some quality songs but they need to add more vitality to their sound.