No Love Lost - Unleash The Shackled 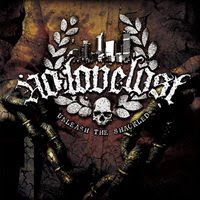 Until I’ve Heard Unleash The Shackled by No Love Lost I never really thought that life in Australia can be that stressful. Themes of anger and frustration are present in every song on this album and I bet that if you listen to this record, you’ll be more cautious about some stuff that is happening around.

From the movie samples they used and type of music they play I expected some typical macho tuff guy style which is not bad in the end, but many times tends to get boring and there is nothing more funny than a guy half my size singing about smacking people up and taking respect. That’s not the deal here. Instead, lyrics deal with serious stuff like domestic violence, increasing brutality of today’s youth, war, terrorism, our government’s selfishness and helping each other out in hard times we’re facing today. I like it when a band can touch important topics without being cliché about it. Strong message they deliver is backed up by powerful voice of the lead singer, Pilks. You can really sense tension and commitment when he’s singing. Combine it with tons of mosh parts, thrashy riffs and a little bit of speed, and you’ll get a perfect hardcore release. They draw influences from bands like Merauder or 100 Demons but add some Clevo flavor to their sound. The intensity never really lets up throughout the album and they put a lot of effort to make it sound both groovy and brutal. Overall, a solid disc a little more on metallic side of hardcore but without sacrificing intensity and energy of the genre.