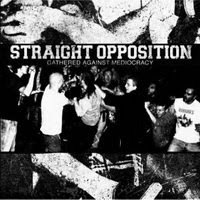 Straight Opposition’s previous release left me with mixed feelings. It was a proper record played with all respect to hardcore standards of today, but after few listens tended to get boring and didn’t manage to keep my attention for long. So it was with some skepticism that I pressed play on their new mini album. I don’t know if it’s the rawer production or just more in your face attitude, but this is way better than Step By Step album.

Since the opening track you can sense the progress they made since the previous record. Their sound is much heavier, songs are faster and vocals meaner. While Step By Step makes me think of New York bands like Sick Of It All, this new CD introduces intense and sinister atmosphere of early Clevo scene to their sound. It can be heard on tracks like Critical Reason vs. Little Italy or Lick The Boss’s Ass. Incorporating metal elements definitely work in their favor.
By keeping their songs tight and intense, Straight Opposition is reaching hardcore heights and proves to be a force to reckon with. Being more compact (clocking in only 12 minutes), it makes you hit play again and again without getting boring at all. Lyrically, they’re rooted deep in left wing state of mind, with songs on working class life, being anti fascist and Palestine-Israel conflict. I can agree with most of the stuff they sing about, even though I’m not down with hammer and sickle symbol at all. To sum it up, it’s definitely worth checking if you like when bands go raw, fast and heavy without sacrificing quality.