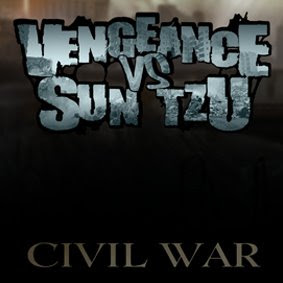 Consisting of nine tracks, weighing in at just under twenty minutes, this split brings you two bloodthirsty and ready for whatever Australian bands – Sun Tzu and Vengeance. It’s not everyday that I get to know new bands from this region but judging from how good this album is, they must have some really strong scene over there.

Sun Tzu set it off with their brand of heavy, metallic hardcore. It’s the first time I hear this band and I can say they sound as good as any band from Europe or USA I know that is doing this type of stuff. These 4 songs are straight and well arranged with harsh, heavy vocals and tight musicianship. It makes me think about bands like Clobberin Time, Merauder or Redline. Nothing new here, but the band manages to deliver catchy hooks along with powerful riffing that will make your ass moving. Their part of this record definitely sounds up to hardcore standards and is highly competitive. Next in line is another Aussie band, Vengeance. Their music is much more dynamic with more changes between fast and slow parts and shouting, strong vocals. While it doesn’t lack heavy breakdowns, it has more in common with bands like Terror or Until The End than Hatebreed and alike. The band knows how to add melodies to their sound without sacrificing intensity and energy and this adds to their offering. Their singer does a great job and is really convincing spitting out lyrics about living in the city, standing your ground and some personal stuff. Overall, this is really good release and definitely worth checking out.