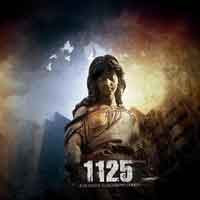 Talking with my fellow hardcore kids from other countries it amazes me how few of them know anything about this band. It’s pretty surprising, considering the band’s first record came out in 1997 and since then has released six full lengths all together (not including two splits), all of them of top quality.

There's plenty to like about 1125. What I dig the most about this album is that even if they made things heavier when compared to their previous releases, they still got the speed, the power and the intensity. 1125 can assault you with adrenaline filled fast part, but also pull back the tempo into nasty breakdowns and groovy mid-tempos. There is nice interaction between both guitars and the rhythm section is sick! These guys out do themselves with each releases and there’s rarely a moment on this new album that’s wasted. The production is noticeably superior to what I've heard from their previous efforts. All the instruments sound clean but thankfully without losing any of the edge. Another high point of this album is vocalist. He’s got really deep and powerful voice and it’s hard to compare him to any other singer in the hardcore scene right now. It is an honest, respectable, and powerful hardcore album from beginning to end. I’m sure the sheer energy and aggression that are showcased here will cause many to pay more attention to what’s going on in the east side of Europe.