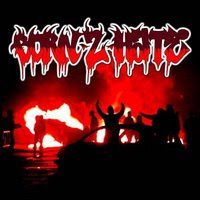 I hope most of you have read the interview with Born To Hate I posted some time ago. If not, I’ll give you brief run down on the band. They’re from Spain, took their name from one of the Death Threat’s songs and after struggling for couple of years with line up changes, last year they finally released their first MCD. And, if it’s of any importance to you, it’s a 100% female hardcore band.

If you think girls can’t mosh, Born To Hate is gonna prove you wrong, and it’s gonna do it hard way! First song, A Sangre Fuego, gets things started with mid tempo passage before exploding into raging hardcore that dominates the majority of the album. Most of the songs are fast paced and aggressive but they do make use of a nice breakdown now and then. I appreciate the fact they are keeping the music straight-forward, no gimmicks. These girls obviously learned their hardcore licks from the bands like Agnostic Front and early Cro Mags, but their music also have a nice punk touch to it. Born To Hate’s debut does have a small flaw, however. It took me some time to get used to vocals. It’s not because it’s a girl’s voice, it’s just a shouting way of singing and I’m not much into it in general. I think they need to work on this aspect on their next effort. Beside that, this is pretty good CD. It's worth a few spins if you're in the mood for some straight forward shit.