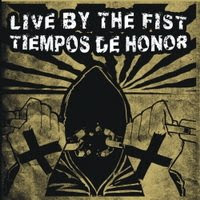 Both bands come from South America and both represent political and social aware side of hardcore. Live By The Fist from Brazil sets it off with 4 intense and punishing tracks. You can hear they are really committed to get their point across. I heard some people comparing them to Path Of Resistance but I can’t totally agree.

They had three people doing vocals on their previous record and it was the main reason for that, but now (according to the booklet) the only official singer left is Sandro. Ok, they still use multiple vocal approach but apart from that, I can’t find any other significant similarities. I think heavy old school hardcore with a strong punk feeling are the best words to describe what’s offered here. They keep it fast with lots of shouting vocals, sharp riffs and tight drumming. Lyrically they speak out about injustice of today’s world, consumerism and general state of our society. These 4 songs are a good follow up to their debut CD, No End In Sight. There’s no letting up when Tiempos De Honor takes over. They sound a little bit heavier and more metal than punk, , but the general feeling is the same. Compared to Live By The Fist , they more often make use of mid tempos and there are some really powerful breakdowns now and then. Also, the riffing is more metallic with a slight Slayerish feeling. The vocals are mainly shouted which is not my favorite style of singing and in this case doesn’t work for me. In my opinion, they should have tuned them down in the mix cause they drown out the music a bit. Apart from that, this CD contains some good hardcore tracks that will make you want to get into the moshpit and throw some punches!